Matt (Luke Wilson) starts dating Jenny (Uma Thurman), who turns out to be the superhero G-Girl. Matt, however, realizes that he has feelings for his coworker Hannah (Anna Faris) and breaks up with Jenny, enraging her to the point that she uses her powers to get back at him- trashing his car, making him lose his job, etc.

Matt is contacted by G-Girl’s arch nemesis Professor Bedlam (Eddie Izzard), who is secretly in love with Jenny. He ropes Matt into a scheme that involves draining G-Girl’s powers into a meteor like the one that gave her her powers in the first place.

Matt cooperates and lures Jenny over to his apartment, but Hannah and Bedlam show up and a fight breaks out. Hannah and Jenny each touch the meteor and both get similar powers as a result.

Jenny and Hannah use their powers to fight, but Matt manages to convince Jenny that they weren’t right for each other and she should be with Bedlam instead. Jenny and Bedlam kiss and Matt and Hannah finally get together. All is well between the four of them and Hannah teams up with G-Girl to save the day. 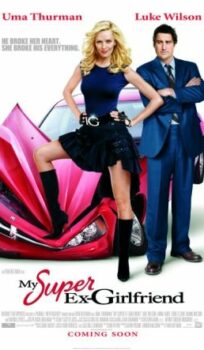