SHORT VERSION:
Bobby passes his French exam, guaranteeing that he will graduate from high school. However, when he meets with his father back home afterward, his father informs him about the $10,000 bonus he promised to pay Terry if this outcome occurred, and he implies to Bobby that her affair with him (which he found out about) was done out of greed. Bobby reacts to this by standing up to his father for once, telling him that he is going to UCLA to study astronomy, his true passion, and not to Yale to study international law like he wants him to. Bobby then confronts Terry and lets her know that he knows about her bonus before calling her a hooker, and she slaps him for that. He then leaves the house to go clear his head.

In the middle of the night, he visits his old crush Bonnie at her house, and he uses his newfound confidence (in addition to some persuasion and a great kiss) to get himself a date with her. Bobby returns home the next morning just as Terry is about to leave for the airport to catch a plane to France to see her family. They apologize to each other over how things went down yesterday, and Bobby lets her know about his possible relationship with Bonnie. He then tells her that he will never forget her, and they have one last kiss before she departs.

LONG VERSION:
Bobby’s (Matt Lattanzi) and Terry’s (Caren Kaye) teacher-student relationship evolves over time into a love affair, beginning the night that Terry discovers that her on-again, off-again boyfriend Don (Bruce Bauer) is cheating on her. She comes back to Bobby’s family’s house after the discovery and tells Bobby about it, and later on, they have sex for the first time.

At Bobby’s birthday party the following day, his father Mr. Chrystal (Kevin McCarthy) has a private chat with Terry. He bluntly tells her that – despite being a married man – he wants to sleep with her, and she responds by shooting him down with disgust. That night, Bobby visits Terry at the guest house to have sex with her again, and having already sensed that Bobby wants to elevate their affair to a romantic one, she tells him that she doesn’t want him to get the wrong idea about where they stand. He replies that he understands their position, but deep down, he very much wants to continue seeing Terry once she is done tutoring him.

The night before Bobby is due to take his French exam, he tells his father over dinner that he is interested in studying astronomy at UCLA and foregoing the international law program at Yale that he has been trying to push him into, but his father refuses to even consider this, believing that astronomy isn’t a profitable career. Later that evening, after Bobby finishes his last study session with Terry, they share a kiss out in the open, unaware of the fact that Mr. Chrystal has seen them while they were in the middle of it. The following morning, Bobby scores a 91% on the exam, guaranteeing that he will graduate from high school, and he reports this good news to Terry when he meets her outside. As they drive back to his house, he tells her that he has made plans for them to go on a romantic trip to San Francisco for a couple of days to celebrate, but she informs him that she has already arranged a solo trip to France to see her family for a while and her flight leaves tomorrow, and this news upsets him.

Upon returning home, Bobby is summoned by his father into his office, and he first congratulates Bobby on passing his exam, having been given the good news by the school over the telephone. However, he then brings up how he promised to give Terry a $10,000 bonus if this outcome occurred, and implies to Bobby that the “special attention” he has been receiving from her all summer was done out of greed. Bobby reacts to this news by standing up to his father for once, telling him that he is going to study astronomy at UCLA, end of the story. He then confronts Terry and lets her know that his father has informed him about the bonus that she is getting, then calls her a hooker. She slaps him in response, and he subsequently leaves the house to go clear his head.

In the middle of the night, he pays his old school crush Bonnie (Amber Denyse Austin) a visit at her house, and using the newfound confidence that he has gained through his time with Terry (in addition to some persuasion and a great kiss), he successfully arranges a date with her. In the morning, he goes back home and finds Terry preparing to leave in a taxi bound for the airport, and they apologize to each other over how things went down yesterday. He also lets her know that he has initiated a possible relationship with Bonnie. He finally tells her that he will never forget her, and they have one last kiss before she gets in the cab and leaves. He then does a jump of excitement over what lies next for him in life. 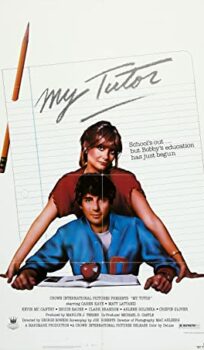