SHORT VERSION:
After Dean Wormer succeeds in having the Delta Tau Chi’s charter revoked and its members expelled from the university (with a little help from the Deltas’ enemy fraternity Omega Theta Pi), the Deltas decide to make him and the Omegas pay. They thus transform Flounder’s car into an armored vehicle and put it inside a cake-shaped breakaway float, intending to sneak it into the upcoming homecoming parade and then unleash it on everyone there.

As the parade is underway, the Deltas first lead the marching band off-course, then they start to wreck the floats either through individual means or when their cake-shaped float drives in and starts playing demolition derby with them, and they also shoot smoke bombs and spill marbles on the street to make the marching military cadets slip and fall. As everyone runs around like headless chickens, the Deltas shed the cake exterior to reveal the armored vehicle, and they drive into the bleachers where Wormer, his wife Marion, Mayor DePasto, and Omega president Greg are sitting and demolish them, causing all four people to go flying off of it and land on their butts. Hoover then appears before the dazed Wormer and asks if the Deltas can be given just one more chance.

Through freeze-frame labels, we find out that the Deltas go on to find various forms of success in life, whereas the lives of the featured Omegas and their associates descend into failure.

LONG VERSION:
At a toga party at the Delta Tau Chi house, Pinto (Tom Hulce) has a good time with Clorette (Sarah Holcomb), a girl he invited, but when they really start to get physical in an upstairs bedroom, she suddenly passes out from drunkenness. Pinto dresses her and then leaves her in a shopping cart outside of her house, where he finds out that she is the daughter of Mayor DePasto (Cesare Danova). Otter (Tim Matheson) goes all the way with Marion (Verna Bloom), the wife of Dean Wormer (John Vernon), at the same party, and when she returns home, Wormer figures out what she had gotten up to that night. He also receives an angry phone call from DePasto, who blames him for his daughter coming home hammered and possibly having been molested as well. Wormer informs him that one of the fraternities likely caused that and he knows which one is responsible, and he will see to it that they get punished.

The Deltas are summoned to a probation hearing a couple of days later, but the hearing is nothing more than a kangaroo court thanks to both the direct influence of Wormer as well as Greg (James Daughton) – president of Omega Theta Pi, the enemy fraternity of the Deltas – serving as chairman of the student court and his frat brother Niedermeyer (Mark Metcalf) serving as sergeant-at-arms. Wormer warns the Deltas that he is going to call their national office and get their charter revoked, and if any of them make one more blunder of any kind, they will all be expelled. In the days that follow, the Deltas lose their charter and the belongings in their frat house get confiscated, and their final blunder comes in the form of their abysmal midterm grades. Wormer has Pinto, D-Day (Bruce McGill), Hoover (James Widdoes), Flounder (Stephen Furst), and Bluto (John Belushi) report to his office, and after going over their terrible grade point averages, he informs them that they – as well as Otter and Boon (Peter Riegert) (who are both unavailable due to Otter receiving a beating from Greg, Neidermeyer, and some of the Omegas over a lie Barbara Sue [Martha Smith] told Greg about Otter having an affair with his girlfriend Mandy [Mary Louise Weller], and Boon making an unsuccessful attempt to reconcile with his girlfriend Katy [Karen Allen]) – are officially expelled and they must get off the campus by 9:00 Monday morning. He also tells them that he took the liberty of notifying their local draft boards that they are all eligible for military service. This news sickens Flounder so much that he barfs on Wormer.

That night, the Deltas are sitting in their house moping over this edict, and then D-Day comes in with a battered and disheveled Otter. Otter informs everyone about who was responsible for his current state, and they, in turn, inform him about the expulsion. Suddenly, Bluto stands up and yells that this isn’t over until they say so, but when no one else stands in agreement with him, he accuses them of having no spirit and no guts, and he declares that Wormer, Greg, and Neidermeyer are all dead men. Otter concurs that they must get revenge on them, and they must go all out with it, and the now-invigorated assembly stands up and agrees to stick it to their enemies. To that end, they take Flounder’s car and convert it into an armored vehicle, then hide it inside a cake-shaped breakaway float so they can sneak it into the upcoming homecoming parade, intending to unleash it on everyone there. That same night, Pinto visits Clorette at her house and gets her to come along with him on an impromptu date, and they go to the college’s football field and lose their virginity together.

As the parade is underway, the Deltas lead the marching band off-course and then start to wreck the floats, either through individual means or when their cake-shaped float speeds in – driven by Bluto, Otter, Boon, and D-Day – and plays demolition derby with them, and damage to public property results. They also shoot smoke bombs and spill marbles in the street to make Neidermeyer and his fellow Reserve Officers’ Training Corps cadets slip and fall. As all of the spectators and participants run around like headless chickens, the Deltas driving the float shed the cake exterior to reveal the armored car, which has the head of the statue of college founder Emile Faber mounted on the hood. Bluto gets out and causes additional mayhem while the other guys drive the car straight at the bleachers where DePasto, Wormer, Marion, and Greg are sitting and demolish them, sending those four flying off of it and onto their butts. Hoover then appears before a dazed Wormer and asks if he and the rest of the Deltas can be given just one more chance.

Pinto then appears before DePasto with Clorette, and Clorette introduces Pinto to him and says that he was the boy who “molested” her last month and they must get married. Incensed, DePasto chases after Pinto. Otter also gets even with Greg for the earlier beatdown by knocking him out with one punch, and Mandy – who is standing nearby – sees this and gives Otter her approval. Neidermeyer tries to shoot Flounder, but he gets snagged by a passing float and carried away. D-Day jumps into a police car and drives off with it. Katy saves Boon from being arrested by claiming to the cops that a nearby fast food joint is being looted, and after they leave, she and Boon kiss. Bluto sees Mandy standing amidst the chaotic crowd, so he grabs her, puts her in the back of a convertible, and drives away with her.

While all the above events go on, we learn through freeze-frame labels about the fates of the Omegas and their associates….

…. And the fates of the Deltas: 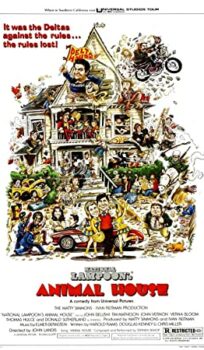