The night before the Armadillos are scheduled to play their last game of the season against the Colts, Coach Gennero (Hector Elizondo) suffers what is believed to be a heart attack. The next day, Coach Riggendorf (Robert Loggia) visits Gennero in the hospital, and Gennero gives him his playbook and whistle and tells him that he will have to be the acting head coach for the game that night.

The Colts hammer the Armadillos during the first half and lead 21-0. In the locker room at halftime, Riggendorf goes berserk on the team and screams at them to play hard-nosed football like how Gennero did, and in the second half, the Armadillos put on a better showing, and Gennero finds out from a doctor that he just had a case of indigestion. Dean Elias (Larry Miller) comes up to the university’s president Purcell (Fred Dalton Thompson) on the sidelines with re-graded copies of the exam from Suzanne’s (Harley Jane Kozak) journalism class (which he undoubtedly gave poor grades so all of the players will be axed from the team and the football program will get shut down like he wanted), but Paul (Scott Bakula) sees this and directs the team to make a play that results in Elias getting tackled down hard by players on both teams before he can show Purcell the scores. Purcell tells the stunned Elias that he is fired.

Gennero then suddenly appears on the sidelines to resume his duties, and later, with just seconds left to play and the Armadillos trailing by one after scoring another touchdown, Gennero decides to let Riggendorf decide whether they should go for the extra point for the tie or the two-point conversion for the win. Riggendorf has the kicking team – Popke (Drew Kahn), Charlie (Andrew Lauer), and Lucy (Kathy Ireland) – put on the offensive line, making the Colts and everyone else think they are going to have Lucy go for a field goal kick to get the tie. However, when the ball is snapped, she fakes the kick, and Paul ends up throwing the ball to Charlie, who makes the two-point conversion and gives the Armadillos their only (but much needed and appreciated) victory of the season. As the team celebrates, Lucy kisses Manumana (Peter Tuiasosopo) on the cheek, causing him to happily faint, and Paul hugs Suzanne, whom he is now dating. 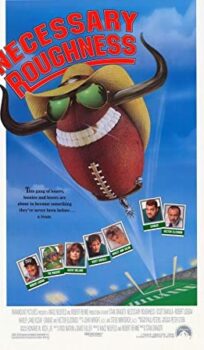