The devil, disguised as seller of wares Lelaund Gaunt (Max Von Sydow) opens up a store in Castle Rock Maine called Needful Things. As the townspeople enter the store, they find Mr. Gaunt sells that one and only thing they need to make them feel better (either emotionally or physically). The prices for these items are always some money, and then a task. The tasks start out as things that seem mundane (throwing mud on white sheets hanging on the clothesline) but quickly escalate. Unfortunately, the townspeople start blaming the wrong people for the crimes and things escalate until they start killing each other. The only person that narrowly escapes the lure of Mr. Gaunt is the town sheriff, Alan Pangborn (Ed Harris). The end of the movie finds utter chaos as the town is looting, rioting, and killing. Sheriff Pangborn makes an empassioned speech and everyone seems to snap out of it. All except downtrodden Danforth “Buster” Keeton (J.T. Walsh) that is, who appears with a bomb strapped to his chest. Luckily, Mr. Gaunt pokes and prods Buster until they turn on each other. Buster runs at Mr. Gaunt and they plow through a window, the bomb goes off, and Needful Things is destroyed. Unfortunately, Mr. Gaunt comes walking out of the fire without a scratch. He declares that while the store was not a resounding success, it was not a total failure either. He then drives off, leaving Castle Rock to pick up the pieces. 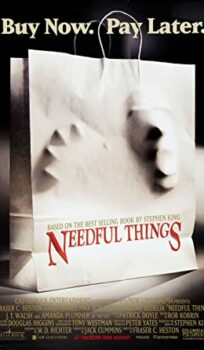