Short version:
Nell is not locked up. She gets to stay home, but opens up to the world. Jerry and Paula fall in love and have a daughter together.

Long version:
Jerry (Liam Neeson) and Paula (Natasha Richardson) spend three months getting to know Nell (Jodie Foster) at her home in the woods and learning her language, although they disagree about the best way to approach her situation, before her case has to go before a judge again. They find out that she had a twin sister who died as a child, which explains some aspects of her language and behaviour, and that her mother had been raped and distrusted people, which was why she had kept Nell hidden away from the world while she lived as a hermit. Nell thinks of Jerry as her guardian angel, and he and Paula act as surrogate parents toward her.

Jerry and Paula try to socialise Nell and take her into the nearest small town. However, the grocery delivery boy who had discovered Nell’s mother’s body tells a journalist about the “wild woman”, and Nell’s woods are soon invaded by reporters, so the sheriff and his wife help Paula and Jerry escape with Nell.

Paula and a reluctant Jerry then take Nell to the city so that a renowned psychologist who wants to study Nell in a laboratory setting can evaluate her ability to take care of herself, but the hospital surroundings overwhelm Nell and make her completely withdrawn and unresponsive. Jerry runs away from the hospital with Nell in his arms, taking refuge in a hotel where Paula later meets him and consoles him over his worries about Nell’s competency being decided by the courts while she’s not acting like herself.

At the competency hearing, Jerry gets angry about the psychologist’s uninformed opinion. His outburst prompts Nell to speak up, and she talks to the court, with Jerry interpreting for her, about the differences between her small life and other people’s lives in the big world.

The movie then cuts to five years later, as Paula and Jerry and now their young daughter are returning for Nell’s birthday. Nell still lives in a cabin in the woods, but now she has made friends from the town. Paula and the sheriff’s wife talk about how they changed Nell’s life and how Nell changed theirs as they watch Nell playing with the little girl by the lake.

The little girl reminds Nell of her dead sister, whom Nell still sadly misses, but she seems happy with her new life. 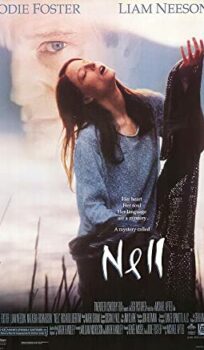