Natalie Lawrence and Steven learn from Paula Peterson that the Neon Maniacs are dwelling in a tower of the Golden Gate Bridge and that water seems to liquidise them. The three devise a plan to arm the students at the Battle of the Bands with squirt guns to be virtually totally protected there.

The Maniacs invade the Battle in hopes of butchering the trio and slaughtering the high schoolers in the process. Since none of the now panicking teens has the nerves to use the squirt guns, Paula uses the fire hose on said Maniacs, killing several, while Stephen and Natalie flee upstairs.

Meanwhile Detective Wiley is killed by a new doctor maniac. Natalie and Stephen manage to use another fire hose to destroy the maniac “Juice”, before they take to the science classroom in order to escape two more maniacs. Once safe from the maniacs, the two make love.

Our trio are taken into custody by the disbelieving cops including investigating Inspector Devin, who, with nowhere better to turn, humors the trio by going over to search the supposed location where the Neon Maniacs nest. He takes a search party of police and firemen but finds zilch. Aggravated by another dead end, Devin seals his fate by staying behind… Coming across a truck with a strange glow emanating from the inside, he decides to have one last look. He opens the doors to be greeted by the sight of some still living Maniacs who respond by pulling him in with them, where he is presumably killed.

Natalie, Stephen and Paula, released by the police, drive away, stating that they are still in danger. 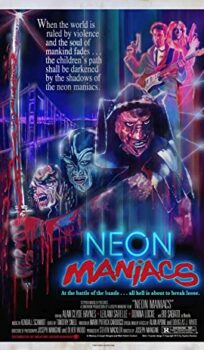