During a dinner with his condescending father-in-law, sociopathic Professor Seeband (Sebastian Koch) -whom he never gets to find out was responsible for sending his mentally afflicted Aunt Elisabeth (Saskia Rosendahl) to her death, many years prior-, Kurt (Tom Schilling) gets a hold of a newspaper article holding a headline picture of captured Nazi Doctor Burghart Kroll (Rainer Bock) -Seeband’s former Superior-. This sets something off in him, finding the inspiration to produce paintings based on copied black-and-white impressions of old photographs, with a manually added blurred effect, which gives the impression of something out of focus to the normal eye (a homage to what Elisabeth told him as a child, to “never look away”, for he would then be able to perceive the hidden beauty invisible to others).

Based on this newfound technique, he pulls off an impressive composite of Dr. Kroll’s picture, a passport photo of Seeband’s and himself as a child with Elisabeth. One day, after starkly ignoring him in the staircase of the hospital where Kurt worked as a floor cleaner, Seeband comes by the studio and tries to make a hypocritical excuse about it; then, he catches wind of the painting, first in awe and, then, in horror, believing Kurt has figured him out, which causes him to stammer and fearfully walk away -his fate is left unknown, since he is not seen for the rest of the film.

Ellie (Paula Beer) finally becomes pregnant and, as a celebration, Kurt photographs her in the nude and reproduces a powerful painting of it. Eventually, with the support of his colleagues and friends Adrian (David Schütter) and Günther (Hanno Koffler), Kurt has a successful exhibition of his work, followed by a press conference in which critics and reporters ask questions that show them as misled by -and even somewhat biased towards- the nature of his paintings (it is unofficially known as “a work with no author”, because of the anonymity of the source pictures).

As the film ends, Kurt passes by a bus station and, just like Elisabeth liked to do, he requests to all the drivers present to honk their horns in unison, which elates him. 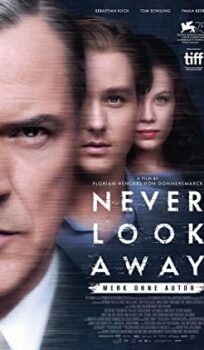