At Nino’s trial he frames his accountant as the real head of CMB and names a list of names. In return, he recieves a reduced sentence that will allow him to be paroled in a year. As Nino is talking to reporters, the old man who had been stalking him throughout the movie shoots and kills him. Nino falls over the banister as Peretti smiles at justice done. Scotty just puts on his sunglasses and leaves, content that his mother’s killer cannot hurt anyone else.

A final text statement notes that though the film is fictional, there are plenty of “Nino Brown’s” around the nation and if a true solution is not found, the cycle of violence and death will continue. 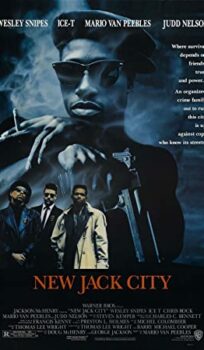