POOPER
Frank is not a cop, nor Kwong’s brother.  He was a child who Chan comforted years ago after his father was killed.  Helping him solve the case was his way of paying him back.  He is arrested for impersonating a cop after the case is solved.

Chan and Frank catch up to the gang at the Bank of Hong Kong.  They are able to kill or incapacitate the gang members, but Frank is captured by Joe, whose father is the Police Chief.  Chan wins the gun assembly game, and Joe tries to surrender, but is shot by snipers.  Chan is able to rescue Frank after they fall off of the roof.

LONG VERSION
Hong Kong Police Detective Chan Kwok-Wing (Jackie Chan) is the head of a 9 person squad, which includes his soon to be brother-in-law Kwong.  A group of five young thugs, led by Joe Kwan (Daniel Wu), has just robbed a bank and killed several policemen in the ensuing shootout.  Once their hideout is discovered, Chan and his men are ordered to arrest the gang.  However, the hideout is booby-trapped, and soon each of the 9 men fall into one of the traps.  Chan is able to chase the gang into a warehouse, where each of the 9 men, including Kwong, are suspended from the ceiling with ropes.  Joe then tells Chan that he must complete several police training regiments, and if he fails, his men will die.  Despite his best efforts, Chan fails and each of his men, including Kwong, are dropped from the ceiling and are killed.  The gang then cover their getaway by blowing up the warehouse.  A distraught Chan, who barely survived the explosion, is suspended for a year from the police force, and gets drunk every night to bury the pain of being the sole survivor.

One year later, Chan is still drinking.  One night, he passes out in an alley and is found by a stranger, who takes him to his house.  The stranger is Officer Frank Zheng (Nicholas Tse), and he says he is Chan’s new partner.  He wants Chan to sober up because the Police Chief ended his suspension so they can catch the gang that killed his men, but he refuses to go back to work.  Frank then tries to reconcile Chan and his fiancee Ho Yee, who he broke up with because he’s convinced she won’t forgive him for her brother’s death.  She does forgive him, but Chan can’t forgive himself and goes back to the bar to get drunk again.  Frank follows him, and finally tells him the reason he wants to be Chan’s partner is because he is also Kwong’s brother.  This finally convinces Chan to sober up and return to the force.  Upon their return, they meet Detective Chiu, who took over the case when Chan was suspended.  Chiu believes Chan’s ego and overconfidence caused those men to be killed.  Chiu believes he will solve the case before Chan and Frank, and even wagers on it, with the loser having to resign from the force.  Before Chan can say anything, Frank accepts.

With help from Sam Wong, one of Chan’s former colleagues, and fellow Officer Sa Sa, Chan and Frank learn the gang members are called the X-Crusaders, and they are into X-Games, and soon they track them to an X-Games event on the roof of a skyscraper.  Meanwhile, Chiu and his team have been following Chan and Frank, and they pick up Sam to assist in their investigation.  On the rooftop, Chan recognizes Fire, one of the members of the gang, but Chiu and his team, along with Sam, arrive and break up the event.  Just as Sam sees Sue, the lone female in the gang, Fire shoots Sam and he and Sue attempt to get away.  As he lays dying, Sam admits to Chan that he took a bribe to cover his gambling debts, and in return he told Joe about Chan’s plan to arrest them.  He admits to killing the team just before he dies, and Chiu heard it all, changing his view about Chan and later calls off the wager.  Meanwhile, Chan and Frank chase Fire and Sue through downtown Hong Kong, but they get away by making a bus full of passengers crash into the harbor.  Chan and Frank break the pursuit to save the passengers.

While at the hospital following the incident with the bus, Chan learns from the Chief that he never reinstated him, and that there is no Officer Frank Zheng.  Chan confronts Frank, where he admits that he is not a cop, nor Kwong’s brother, but he has his reasons in wanting to help Chan.  Instead of arresting Frank for impersonating a police officer, Chan allows Frank to continue investigating the gang.  Fire and a badly injured Sue return to the hideout, where Joe promptly kills her, then they hack into the police computer system to find out all they can about Chan, including his fiancee.  Meanwhile, Sa Sa has learned that the X-Crusaders all come from wealthy families, and that Joe is actually the son of the Police Chief.  Through flashbacks, we learn that Joe was abused by his father, and that is why he has deep hatred of the police.  Joe gets Ho Yee to come to the police station, where he places a time bomb around her neck.  It’s defused and removed, but a secondary trigger is activated, blowing up the bomb.  As a result, Ho Yee falls into a coma.

While Ho Yee recovers, Frank is arrested by the Chief for impersonating an officer, and so is Chan for working while under suspension.  Joe and the rest of the gang visit them in jail to taunt them and tell them that they’re pulling another job tonight.  Sa Sa, with the help of her father the jailer, let Chan and Frank out.  The rest of the force pretend not to see them “escape”, and even Detective Chiu gives Chan a gun.  They then learn the target will be the Bank of Hong Kong.  Chan and Frank, along with several cops arrive, but they begin to evacuate the building instead of confronting the gang.  Also, the parents of the gang members arrive, and Max, one of the members, tries to surrender to them.  Joe shoots and kills Max, setting off pandemonium.  Chan and Frank then chase after the gang and fight them.  In the process, Fire and the last member, Tin Tin, are shot but survive.  However, Joe captures Frank, and takes him to the roof.  On the rooftop, Chan convinces Joe to play another police training game involving assembling a gun, and they are playing for Frank’s life.  Unlike a year ago, Chan wins.  Joe admits defeat, and tries to surrender, but a police sniper shoots Joe.  Since he was holding Frank by a rope, the shooting causes him to let it go, causing Frank to fall off of the roof.  Chan rushes to save him, but both of them fall off of the building, but they land on a fireman’s safety cushion.

Some time later, Ho Yee is released from the hospital.  As she is leaving, Chan, who has been reinstated to the force, proposes to her in front of the entire Hong Kong Police force.  She is hiding her facial scars from the explosion, but Chan loves her regardless of how she looks, and she say yes.  Frank and Sa Sa also witness the proposal, then she takes a handcuffed Frank back to the police station, leaving his jacket behind.  Chan sees the jacket, then has a flashback to many years ago.  A thief was killed trying to steal a sandwich from a 7-11 to feed his son.  A young Detective Chan comforted the boy, and gave him his jacket to keep him warm.  That left behind jacket was the one Chan gave to that boy (a young Frank Zheng), and solving this case was his way of paying him back.

The movie ends with outtakes of the action scenes, showing that Jackie Chan, Nicholas Tse, and the other actors did their own stunts. 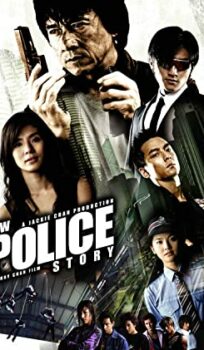