POOPER:
Joey killed Truman’s brother Gerald, and later killed his other brother Briar.  Joey also killed “PappaJohn”‘s son Lawrence and made it look like Briar did it.  After a shootout in a cemetery between the mob and Truman’s family, John kills Joey.  John and Truman then declare a truce.  Truman later tells his wife Jessie that she and their unborn child are his only family now.

LONG VERSION:
Truman Gates (Patrick Swayze) is a Chicago police detective, originally from Harlan County, Kentucky.  His brother Gerald (Bill Paxton) is also in Chicago, working as a vending company truck driver until he can make enough money to return to Harlan and start his own business.  The Isabella crime family, headed by “PappaJohn” Isabella, is trying to take over that vending business, and he has sent his son Lawrence (Ben Stiller) and his right hand man Joey (Adam Baldwin) to get the deal done.  One night, they attempt to hijack Gerald’s truck, and he ends up getting killed by Joey, much to Lawrence’s horror.  Truman and his wife Jessie (Helen Hunt) take Gerald’s body back to Harlan for the funeral, where they are met by his family.  Truman has become estranged from them since his decision to leave Harlan to become a cop, especially by his other brother Briar (Liam Neeson).  Briar and the family want to go to Chicago to get Gerald’s killer due to their “eye for an eye” mentality, but Truman insists that the police will get his killer.  He also doesn’t want to potentially lose another brother.

Back in Chicago, and knowing that Isabella’s men are involved in the murder, Truman goes to see PappaJohn and tries to convince him to turn over Gerald’s killer or face the bloodbath that his family will deliver.  He refuses, and Truman continues his investigation.  Meanwhile, Briar has driven to Chicago and is staying at a flophouse while he does his own investigation.  He gives Harold, one of the other men there, a phone number to call in case something happens to him.  He quickly learns of the Isabellas and goes to their hangout, which he proceeds to shoot up.  Truman finds out his brother was the shooter and has him arrested.  At the police station, Truman tells Briar that he can either stay in jail or help him find the killer and let the law handle it.  Now working together, they learn that Lawrence and Joey were involved in the murder.  Truman approaches Lawrence about turning state’s evidence on Joey.  Meanwhile, Joey and his men find where Briar is staying and try to kill him.  He gets away, but they find his guns.

After his conversation with Truman, a shaken Lawrence goes to Joey and asks him what they should do.  Joey tells him he knows what to do and has him get in a car.  Hours later, Lawrence is found dead, and the evidence, which includes Briar’s guns, makes it look like he did it.  A distraught PappaJohn tells Joey to kill Briar for killing his son, but before he can find him, Briar returns to the hangout and starts a shootout with Joey and his men.  Briar kills some of the men, but Joey kills Briar.  When Harold hears about Briar’s death (he knew Briar was going to the hangout that night), he calls that phone number, and Briar and Truman’s cousin Hollis answers.  Harold tells him the bad news, and within minutes Hollis has rounded up the entire Gates family and begin heading to Chicago.  Later that night, a drunken Joey says that he was the one who killed Lawrence and set it up to look like the hillbilly did it.  One of Joey’s men, shocked by that news, then tells PappaJohn’s lawyer what he heard.

Truman knows that Briar didn’t kill Lawrence, but the police can’t prove he didn’t.  In frustration, Truman takes off his badge and vows to kill Joey and his men himself.  He sends a message to Joey to meet him at a local cemetery, and Joey says he will kill Truman even without PappaJohn’s permission.  At this time, the family arrives at Briar’s flophouse, and Harold tells him where the cemetery is.  At the cemetery, Truman is preparing his weapons for the ambush when he learns that his family is there.  The shootout then begins with the mob, and one by one the mob members are killed.  Soon, only Joey is left, and Truman has a knife to his throat.  Just then, PappaJohn and the rest of his men arrive at the cemetery with their guns drawn.  They quickly capture the Gates family and order Truman to let Joey go.  He does and Joey moves away, expecting John to kill Truman.  Instead, John turns his gun on Joey and says “this is for killing my son”, and shoots him dead.  PappaJohn and Truman then call a truce and let the rest of the family go.

The movie ends with Truman getting back with Jessie (he sent her away for her safety) and tells her that she and their unborn child are his only family now. 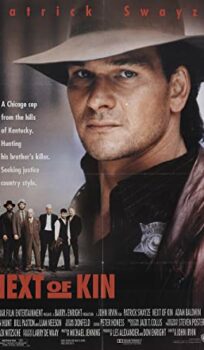