Submitted by Some Guy

Cris Johnson (Nicolas Cage) and Liz (Jessica Biel) fall in love and have sex. Afterward, Liz learns that Cris can see into the future and he is given to the FBI, while she gets captured by the assassins who are out to kill Johnson.

Cris discovers that Liz is now strapped with explosives and is going to be killed. Many explosions and shootouts later, she is saved, and they focus their attention on the nuclear device. But Cris made a mistake in the process, so the device goes off, destroying Los Angeles.

After a big explosion… Cris wakes up in the bed with Liz, just after having sex. He calls the FBI to cooperate and tells her to wait for him. He gets in the car with Callie Ferris (Julianne Moore) to help her.

That’s right. The entire second half of the movie was a dream. 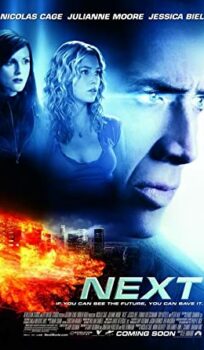