Harry Fabian (Richard Widmark) is a small time hustler.  While working the crowd at a wrestling match, he overhears an argument between Gregorius and his son Kristo.  Gregorius was once a great wrestler, in the classic Greco-Roman style.

Gregorius is upset that his son has turned the sport into a spectacle.  Fabian works his way into a friendship with Gregorius.  His plan is to use Gregorius’s reputation and contacts to start a rival wrestling company.  Kristo has mob connections, but Fabian is not scared away.

Fabian convinces Gregorius to let his best wrestler fight Kristo’s best wrestler to settle the question of whether the old style or new style wrestling is better. The publicity is huge, and it looks like the fight will be a great money making spectacle.  Fabian needs financial backing, and gets it from Phil Nosseross, owner of a nightclub.    Nosseross’s wife Helen is after Fabian, more to spite her husband than out of love for Fabian.  Fabian also has a virtuous neighbor, Mary, who truly does love him.  Mary tries to get Fabian to go straight, with no success.

Helen gives money to Fabian with the understanding that he will use it to secretly get her a license to open her own nightclub.  She will then be free of the husband she detests.

Just as it appears that Fabian will finally hit a big score, everything starts to fall apart.  Helen leaves Nosseross, revealing her contempt for him, and Fabian’s double cross of Nosseross.  Helen opens her nightclub, and immediately finds out that Fabian used her money on his wrestling promotion and gave her a fake license.  She goes back to Nosseross, but Nosseross killed himself when Helen left (but first wrote her out of his will).  Worst of all, Gregorius and the opposing wrestler end up brawling before the match.  Gregorius defeats the much younger stronger man, proving the supremacy of classic techniques, but drops dead of a heart attack right after.  Kristo blamed Fabian for turning his father against him, and now blames him for his father’s death.  Kristo offers a huge reward to anyone who delivers Fabian to him.

Fabian is desperate and on the run, with all the underworld eager to betray him for the reward.  Mary comes to his hiding place and offers to help him escape.  Fabian has one last idea to redeem himself.  He tells Mary to turn him in to Kristo, so she will get the reward.  Mary refuses.  Kristo and his men are closing in.  Fabian runs out yelling at Mary as if she were turning him in.  Fabian is killed and thrown in the river.  Since Kristo’s men witnessed “Mary turning Fabian over to Kristo” it appears that she will get the money. 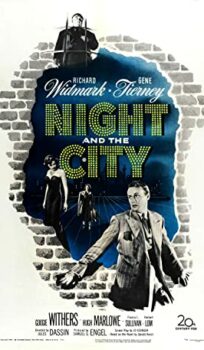