With the aid of Sir Lancelot (Dan Stevens), Larry (Ben Stiller), Nick (Skyler Gisondo), Teddy (Robin Williams), Attila (Patrick Gallagher), Sacajawea (Mizuo Peck), and Akhmenrah (Rami Malek) make their way past some of the more dangerous exhibits at the British Museum until they reach the Egyptian wing, after which they bid Lancelot farewell. They then find Akhmenrah’s parents, Merenkahre (Ben Kingsley) and Shepseheret (Anjali Jay), and Akhmenrah happily embraces them. Larry tells Merenkahre that something is wrong with Akhmenrah’s tablet, and after checking it over, Merenkahre says that it is losing its power. He is initially hesitant to divulge the tablet’s secret aloud because he intended for it to only be passed down to Akhmenrah at the proper time, but his son informs him that 4,000 years have passed since their era, so now is as good a time as any. Merenkahre thus explains that, when he first gazed upon Akhmenrah after his birth, he instantly adored him, and he knew he could not bear the thought of having to say goodbye to him one day. Therefore, he commanded his high priest to create the tablet as a gift to Akhmenrah using all that they had learned of the mysteries of the afterlife. The tablet was forged in the temple of Khonsu, the moon god, and their family’s tomb was designed to channel Khonsu’s rays (moonlight) down to the tablet and rejuvenate its powers every night. As long as the tablet remained bathed in moonlight, their family would be together forever, and not even death would separate them. The tablet is slowly being covered with the green rust because it has been away from Khonsu’s light for too long.

Suddenly, the tablet corrodes further, draining more life out of Akhmenrah and the other New York exhibits. Merenkahre gives Larry the tablet and tells him that it needs moonlight, otherwise they will all be dead by sunrise, and if the tablet dies, nothing can bring it back. Larry and Nick hurry over to a skylight in another part of the wing where the moon’s beams are shining through and Larry puts the tablet under the light, but before he can set all of its tiles into place, Lancelot suddenly appears in front of him with a knife at Nick’s throat. He orders Larry to hand over the tablet, then snatches it from him and lets Nick go, and we find out that Lancelot has mistaken the tablet for the Holy Grail since they told him it was magical. Larry orders him to give it back because he doesn’t know what he is doing, but Lancelot says that his quest to find the Grail is complete and he will be heading back to Camelot, after which he runs off. Before Larry gives chase, he sends Nick to get the others so they can help them keep Lancelot from leaving the building. Soon, Larry and Teddy find and stop Lancelot, but he manages to escape them despite them putting up a good fight. Meanwhile, the museum’s night guard Tilly (Rebel Wilson) wakes up in her guard booth and sees Laaa (also Ben Stiller) on the security camera guarding the freight door, so she heads out to deal with him.

Larry, Nick, Teddy, their friends (which now includes Jedediah [Owen Wilson], Octavius [Steve Coogan], and Dexter the monkey, all of whom got separated from the group earlier on), Merenkahre, and Shepseheret meet up at a crossroads section. Teddy asks why Lancelot is staying strong while they get weaker, and Merenkahre answers that this is his first night alive and newborns are stronger, but he, too, will die at dawn if the tablet isn’t fixed by then. Larry thus orders everyone to cover different exits to keep Lancelot inside, with him covering the main entrance. However, when he gets there, he sees Lancelot has already made it outside and is galloping away on a horse, and when he tries to pursue him, Tilly appears with a handcuffed Laaa and halts him. He tries to get past her and continue the chase, but he gives up after Tilly threatens to harm Laaa and Laaa says “dada” to him, since he views him as his father.

Tilly locks Larry and Laaa in the break room, but when she goes into her booth to call the police, Nick appears with Dexter and Attila, and the latter destroys the phone before they lock her inside. Laaa frees himself and Larry by breaking the door’s window with his head, and then they go outside and meet Nick, Akhmenrah, and the rest of the New York exhibits. Teddy tells Larry that Tilly has been locked in her booth but he doesn’t know how long it will hold her, and Larry says that someone will need to watch her to make sure she doesn’t get out, to which Laaa volunteers to stay and do that. As he watches her, they eventually develop a mutual attraction. Meanwhile, Sacajawea using her tracking skills to lead the gang along Lancelot’s trail to Trafalgar Square, but the trail goes cold there. As Teddy wonders aloud where Lancelot could be, Larry spots a nearby advertisement for the Camelot musical being held at the London Palladium (which Lancelot had also earlier seen), so they immediately head over there.

Lancelot interrupts the musical while Hugh Jackman (himself) and Alice Eve (herself) – playing, respectively, King Arthur and Queen Guinevere – are in the middle of a song, and though Hugh and Alice explain to him that they are not Arthur or Guinevere, Lancelot doesn’t buy it and shows Hugh the tablet and gloats over how he has found the Holy Grail first. When Hugh tries to usher him off the stage, Lancelot draws his sword and points it at him, and it is only when Hugh shows off his wooden sword and Lancelot takes a good look at his surroundings that Lancelot accepts that none of this is real. His dream of ruling Camelot now crushed, he flies into a rage and starts to wreck the set, scaring the audience out of the theater. Larry and the others then arrive, so Lancelot takes a torch from the set and makes for the roof. The gang corners him there, and after pulling out his sword again to keep Larry at bay, Larry explains to him that he and everything else about Camelot is all a legend. He pleads for Lancelot to hand over the tablet, but Lancelot asks if this means going back to the museum if he does, and he derides the thought of returning there and standing around all day every day while little children ogle and point at him. Teddy tells him that they also learn and get inspired to do great things, and there are far less noble fates than that. He replies that there aren’t for him, and if he nor anything else about Camelot exists, then all he is is a useless wax figure. Soon after, the tablet corrodes almost completely and the New York exhibits are teetering on the edge of death, and Larry begs Lancelot to straighten the pieces on the tablet or else they – and he – will die, but the disheartened Lancelot says that a world without Camelot is not a world worth living in. However, as he watches Dexter become lifeless and Larry trying to comfort him as he passes, Lancelot finally understands that Larry’s quest was always about the exhibits, not the tablet, and he begs Larry for forgiveness before handing him the tablet. Larry sets the tiles in place under the moonlight, and the tablet becomes fully rejuvenated and restores the exhibits to life. They all happily embrace, and Larry gives Lancelot his thanks.

Everyone returns to the British Museum, and Akhmenrah gives the tablet to his parents, and Merenkahre praises Larry for his efforts. However, the New York exhibits then get Larry’s attention, and Teddy tells him that they have been talking and they have decided that Akhmenrah’s place is here, as is the tablet’s. Larry takes this to mean that they will be staying here, too, but they say that they belong in New York, which means that they are giving up their ability to come to life at night. However, they are fine with that because being a museum exhibit makes them alive in the hearts of others. With a heavy heart, Larry accepts their decision. He, Nick, and the exhibits say farewell to Akhmenrah, his parents, and Lancelot, and Larry visits Tilly to collect Laaa, who kisses him goodbye and vows to never forget him. Before leaving, Larry assures Tilly that, tomorrow night, she will have the best job ever.

Larry, Nick, and everyone else immediately catch a flight back to New York so the exhibits can get back to the Museum of Natural History while they are still awake. Once they return, Larry has a fond farewell with all of the exhibits, with him saying goodbye to Teddy last. Teddy compliments him on how good of a job he has done with raising Nick and knows that he will do great things, then he remarks to Larry that now it is time for his next adventure (since Larry is leaving the museum; more on that shortly). The sun soon rises and solidifies everyone, and Larry heads outside to meet up with Nick. Larry gives him his approval to go DJing in Ibiza, then they give each other their love and hug before Nick walks off towards his mother’s home. Larry takes one last look at the museum before going on his way.

Three years later, the museum is holding a special exhibition for the treasures of the British Museum, and we see Tilly with Dr. McPhee (Ricky Gervais) in his office after closing time. McPhee reveals that Larry took the heat for the disastrous reopening gala of the renovated Hayden Planetarium at the start of the film and got him his job back as a curator, and he says that Larry returned to school, earned his degree, and now works as a schoolteacher. Tilly tells him that, when Larry heard about this exhibition, he wanted her to deliver the Tablet of Akhmenrah to him personally, which she then takes out of a case and hands over to him. She tells McPhee that Larry said he could be trusted with its secret, and moments later, the tablet glows in front of him. Soon after, the exhibits come to life and have a big party, and Tilly shows this to McPhee, who is amazed and delighted. Tilly also takes this opportunity to reunite with Laaa. The movie ends with Larry being shown standing outside the museum and quietly observing the festivities. 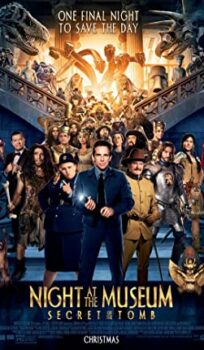