CUT TO THE CHASE:
Larry (Ben Stiller) gets a job as the night security guard at the Museum of Natural History (which has seen a massive decline in tourists) in New York City. The evening that Larry brings his son, Nick (Jake Cherry), to the museum to witness everything come to life, nothing happens. He discovers that the golden plate artifact of Egyptian King Ahkmenrah (Rami Malek) was stolen by the retiring security watchmen (Dick Van Dyke, Mickey Rooney, and Bill Cobbs). Chaos ensues both inside and outside of the museum as everything begins to run amok. Larry enlists some help, including from his son, Teddy Roosevelt (Robin Williams), Sacajawea (Mizuo Peck), the Egyptian king, the skeleton T. rex, and most everyone and everything else in the museum. Through a massive team work effort led by Larry, quiet is restored in the museum, and the scheming old security guard trio is captured. Larry gets to keep his job when the people of New York flock to the museum to see the “publicity” left by the dinosaur footprints in the snow and the cavemen drawings in the subways.

LONGER POOPER:
Larry Daley (Ben Stiller) feels like he’s about to lose his pre-teen son, Nick (Jake Cherry), in a divorce unless he gets a job fast. Larry ends up taking over as the night security guard at the Museum of Natural History in New York City. The museum has seen a great decrease in visitors over the past few years, so Larry is replacing three men. The three retiring night watchman – Cecil, Gus, and Reginald (Dick Van Dyke, Mickey Rooney, and Bill Cobbs) – fail to mention that everything in the museum comes to life at night. It turns out that when an Egyptian artifact of King Ahkmenrah (Rami Malek) arrived in the 1950s, everything comes alive at night.

At first Larry is freaked out, but eventually comes to enjoy his job, even bringing his son one night. When his son visits, though, nothing comes to life. Larry discovers the gold plate has been stolen along with other items. The three exiting watchman planned on stealing a bunch of artifacts from the museum that night to finance their retirement, and let Larry take the fall for the robbery Among the artifacts was the gold plate of Ahkmenrah, because the plate also helps the three aging men feel young and alive again every night. Nick activates the golden plate to distract the old guards. Chaos in the museum ensues, including most of the African Safari Room animals leaving the museum to wander around in Central Park.

To restore order and get all the artifacts back, Larry enlists the help in the form of everyone and everything in the museum: the Egyptian king, Sacajawea, Teddy Roosevelt, Attila the Hun, the Vikings, the Civil war soldiers, the Easter Island statue, Christopher Columbus, the Neanderthals, you name it.

Reginald and Gus are tracked down and captured by some of the museum figures, while Cecil attempts a van getaway. Jedidiah (Owen Wilson) and Octavius (Steve Coogan) let the air out of his tires just moments before, so Cecil goes back inside the museum and steals the stagecoach.   With the help of Roosevelt’s horse and the skeleton T. rex, they catch up to Cecil on the stagecoach. Larry gives the command for the stage horses to stop: “Dakota!” The coach suddenly stops, throwing Cecil off. The Huns capture him and return him to the museum. Ahkmenrah reads from the golden plates a command which orders all the museum relics and artifacts back to the museum before dawn (they would have all turned to dust if left outside when the sun rises).

Museum Director Dr. McPhee (Ricky Gervais) is outraged because the news is reporting the resulting chaos in the city such as cavemen drawings in the subways and T. rex prints in the snow that leads to the museum. As he is escorting Larry out, they witness a total rebirth in tourism as people begin to flock back to the museum. McPhee gives Larry his job back when he realizes that everyone in New York thought it was great publicity for the museum. 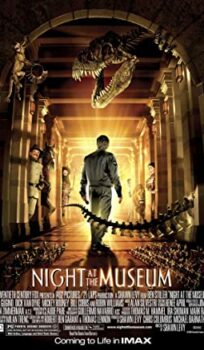