Two radical environmentalists Josh (Jesse Eisenberg) and Dena (Dakota Fanning) team up with Harmon (Peter Sarsgaard) a former marine to blow up a dam, in a misguided attempt to help the environment.

They succeed and despite some close calls, escape unnoticed.

Josh begins to be suspected at the farm he lives at (and finds the people who live there consider what he did to be pointless “theater”) and is eventually told to leave. Dena becomes guilt ridden when she leaves a camper drowned due to the dam being destroyed and appears ready to confess to the police. Harmon tells Josh something must be done about her.

Josh goes to Dena to warn her, but she thinks he’s there to kill her and attacks him in fright. She tries to run, but Josh catches up to her and strangles her to death. Josh calls Harmon and tells him an “accident” happened with Dena and suggest they get out of the state together. Harmon tells him no, that Josh must disappear, and to never call him again. Josh goes into a camping store and asks for an application. In order to remain free from suspicion, Josh must ironically join the society he so despises. 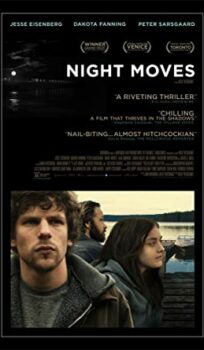