Short pooper:
Teddy (Kevin Hart) does not pass the GED test with the rest of his fellow night school classmates. Nonetheless, undeterred, he decides to try it again. After four attempts, he successfully completes it and graduates. Afterward, he apologizes to Lisa (Megalyn Echikunwoke), comes completely clean about himself and they make up.

Longer version:
After taking the fall for the group agreeing to steal the test and, in turn, being expelled from night school, Teddy (Kevin Hart) returns and pleads to Carrie (Tiffany Haddish) for a second chance, wanting to make things right. It is revealed that her daytime teaching job is Special Ed students; thus, she agrees to have him back on the condition of him getting tested for what she perceives could be one or more learning struggles. Indeed, the tests reveal Teddy suffers from dyslexia, dyscalculia -the Math version of dyslexia- and “other concentration issues” -possibly ADHD-; this all explains why he was never able to cope well with studies, during his school years, and why he got deterred and dropped out, due to having no help from anyone to overcome it.

By means of some very unorthodox -but effective- methods, including unmercifully beating him up through boxing lessons, Carrie is able to help him excel in night class; in turn, he becomes a better and more open person towards his classmates and even a more focused employee at Christian Chicken.

The last night of class happens to fall on Prom Night, so Teddy suggests they participate in it, too; Carrie agrees. As they are all partying and having a good time with the high school kids, Lisa comes in, guided by Stewart (Taran Killam) -who got close to her, via Facebook, under the guise of a sponsorship for the school-, and is taken aback, by discovering Teddy was not a financial investor and seeing that he was never honest about his effort of properly finishing his education. She breaks up with him, which causes him to get despondent and, once more, give up on the process and just conform to stay at Christian Chicken.

Stewart comes to him and sincerely apologizes for his ploy, also admitting, in the process, that, despite being an academically gifted student and a target of Teddy’s bullying back in High School, he was always jealous of how magnetic and eloquent Teddy was. At the same time, Carrie -who came along and had actually coerced Stewart to stand up for what he did- convinces him to give the GED another shot, and so he decides to take the test.

However, when the results are released, he scores well below the minimum mandatory 145 mark, unlike the rest of the group, who all pass with fairly flying colors. Yet, feeling motivated, he goes for it again… and again… and again… and again, until, after four attempts, he passes. At graduation, with all of his classmates in attendance -including prison inmate Bob (Fat Joe), who was also graduating-, he delivers a heartfelt speech about the importance of second chances, believing in yourself and others, and never stop trying in life. Lisa comes to the event and sees this, from the audience.

After the main event, Teddy catches up with Lisa, opens up about who he really was and what he wanted to do, hoping to make amends with her. She takes him back and he asks her out, but warns her about being broke, to which she shows no concern.

Before the credits roll, at the Graduation Dance, Stewart cuts in and tries to pull off his recurrent “black-voice” number seen throughout the movie; but, then, drops it, proclaims “THIS IS MY HOUSE!!” and starts throwing some killer dance moves, at the surprise and amusement of the students. 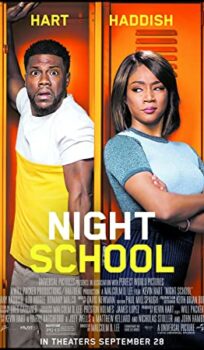