Pooper:
Natacha was herself a child abducted by an evil witch before she put the witch to sleep and stole the witch’s powers. The witch awakens and defeats (but does not kill) Natacha. Alex, Yasmin, and the cat Lenore manage to escape the magical apartment, kill the evil witch, and return to their families.

Long Ending:
One night, Alex (Winslow Fegley) is throwing a tantrum as his parents argue in the background. He grabs a collection of short horror stories he’s written, called a Nightbook that he intends to burn, and runs from his apartment. He is lured into a different mysterious apartment where he takes a bite of pumpkin pie and passes out. When he awakens, he finds he is trapped in the clearly magical apartment owned by an evil witch named Natacha (Krysten Ritter). The witch agrees to spare his life so long as he prepares a new horror story to read to her every day. Each night, she sprays on a magical perfume and listens to Alex’s stories. Although she belittles his work and forbids him from telling stories with a happy ending, she keeps him alive.

Alex meets Yasmin (Lidya Jewett), another kid who is trapped in the apartment as Natacha’s maid. Yasmin explains that the apartment travels around the globe luring in unhappy kids. When Natacha is out, they are watched by her cat named Lenore, who can turn invisible. Although Yasmin and Lenore are initially mean to Alex, they eventually bond with him when he protects them from Natacha’s rages as well as an evil creature called a shredder that lives in the witch’s indoor garden.

Yasmin tells Alex that when kids outlive their usefulness, Natacha turns them into porcelain figurines. When reading books in the witch’s library, Alex finds messages written by a child who made a sleeping potion to drug the witch in order to escape. The two kids follow the same plan, even tricking Natacha into giving them some of the ingredients. The kids (and the cat) then manage to knock Natacha out by putting the sleeping potion into her bottle of perfume.

The kids steal her keys and use it to open a locked door in the apartment. Rather than taking them outside, it takes them to a fantasy land containing the candy house from the story of Hansel and Gretel. Yasmin and Alex eat some of the candy and pass out. When they awaken, they are in the basement of the house with a revived Natacha. She reveals that she herself was once a regular child who had been captured by the child-eating witch from the Hansel and Gretel story (and she is the one who wrote the notes about the sleeping potion that the kids found). After successfully escaping the witch, Natacha returned to her home to find her parents had moved away. With nowhere else to go, she returned to the witch and kept the hag drugged on sleeping potion. The perfume Natacha sprays on herself is derived from the sleeping witch and is the source of Natacha’s magical powers. She also explains that horror stories with unhappy endings helps keep the witch asleep.

Alex begins telling the story of what happened to him the night he was captured by Natacha. He explains that due to his love of horror stories, his peers deemed him a freak and refused to come to his birthday party. Feeling all alone, he tried to destroy the stories he loved so much. But Alex then says that being abducted by Natacha created a happy ending for him, because he now has friends in Yasmin and Lenore. This happy ending causes the witch to awaken and she and Natacha begin fighting as the children and cat flee. Using the perfume on herself, Yasmin is able to conjure a spell to release them back to the real world. Meanwhile, the awakened witch crushes Natacha under a falling wall and pursues the kids to the real world, noting that she is starving.

The witch stalks the children to the furnace room in Alex’s apartment complex and is about to eat Yasmin when Alex holds up a notebook claiming that it contains scary stories. The witch is unable to resist the allure of the stories and abandons Yasmin. Alex throws the notebook into the furnace and the witch follows in an attempt to save it. The kids and Lenore lock her in the furnace where she burns to death. Alex and Yasmin are then reunited with their families and Alex adopts Lenore. They all remain great friends. However, Natacha is seen having survived her battle with the witch before the credits roll. 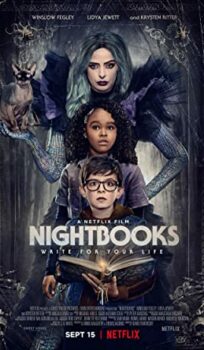