Pooper:
The borehole didn’t penetrate hell, just a cavern that released hallucinogenic spores. All the supernatural stuff is a delusion. Christensen isn’t the devil, just a worker on the project. Jackmann goes crazy and then commits suicide.

Long Version:
Thomas Jackmann (Adrian Paul) arrives at a remote mining facility in the desert to investigate the loss of contact with the team working there. The facility was attempting to bore the deepest hole ever drilled, and had reported reaching a depth of nine miles before going quiet. Initially he finds the facility deserted, with signs of violence and chaos visible – including one room with what seems to be an animal sacrifice and strange symbols on the walls. We learn that Jackmann recently lost his wife and kids to a murder/suicide, and still suffers greatly from the loss.

As he explores he comes across Dr. Christensen (Kate Nauta), a young woman who says she worked for the project. She says the project reached nine miles depth and then the drill broke into some sort of underground cavern; a listening device lowered into it recorded audio which sounds like thousands of voices screaming in pain and terror – many came to believe that they had broken into hell (the movie is based on the well known ‘Well to Hell’ urban legend.) Shortly afterwards everybody went insane simultaneously and then vanished. Jackmann isn’t sure whether to trust her, as her name does not appear on the official records of the facility.

As time passes Jackmann begans to have strange and disturbing visions. These include seeing Christensen as a monstrous figure, and visions of his dead wife urging him to commit suicide so that he can rejoin his family. He begins an affair with Christensen, but his grip on reality gradually begins to slip. He comes to believe that the project did indeed break into hell, releasing some supernatural evil. He attacks Christensen when he sees her as a monster, before snapping out of it.

As his visions worsen, Christensen reveals that she is the devil. She knows how badly he misses his wife and family, and if he agrees to sell his soul to her, she will take him to them. To do so, he only has to say that he agrees to sell his soul to the devil six times in a row with complete sincerity. He does this, and she tells him she will take him to his family. However, he sees a vision of his them there at the facility and thinks Christensen is trying to trick him away from them. He stabs her in the stomach with a screwdriver and they both collapse. Delirious, he seems a monster coming for him…

However, the ‘monster’ is revealed to be a man in a mask; part of a rescue team. Jackmann and Christensen are airlifted out of the facility. In the aftermath, the truth is revealed – the cavern was formed millions of years ago, trapping a large mass of biological matter. When the cavern was breached it released clouds of spores which caused delusions and hallucinations. Christensen really was a member of the team, and proved to be much less susceptible than the others for unknown reasons. The recording is explained away as random noises caused by weird airflows around the borehole.

Christensen, seeing that the same thing was happening to Jackmann, decided to play into his delusions and went along with his idea that she was the devil in a desperate attempt to draw him away from the site and the spores from the borehole.

Jackmann is put on medical leave and goes to see Christensen in hospital. As he nears the door she is talking to a fellow agent, laughing. He looks into the room and sees a horrific figure in the mirror. Becoming convinced again that Christensen really is the devil he bursts in and grabs the other man’s gun. In the struggle it goes off and Christensen slumps in the bed, blood spraying all over the wall. Jackmann turns and sees the ‘horrific figure’ was a very old woman with a skin disease who was in the next bed, behind a curtain. Stunned, he staggers from the room – and we see what he didn’t, that his shot hit a blood pack that was being used to transfuse Christensen. He didn’t hit her, and she’s perfectly fine if a little shocked.

The horrified Jackmann staggers through the hospital as his wife appears to him, begging him again to kill himself. He puts the gun to his head and a shot rings out. 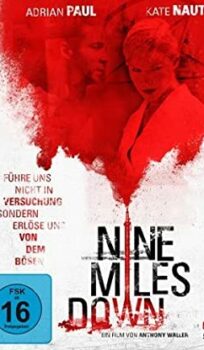