Guido (Daniel Day-Lewis) is an Italian film director scheduled to make a film while suffering from writers block and a lot of pressure from everyone.

Guido interacts via musical numbers with his mistress (Penelope Cruz), his wife (Marion Cotillard), his film star (Nicole Kidman), his costume designer (Judi Dench), an American fashion journalist (Kate Hudson), a prostitute from his youth (Fergie), and his mother (Sophia Loren).  Guido loses his wife, gives up making the movie and retreats from the world.

After 2 years Judi Dench convinces him to return to making movies because “there probably isn’t a single person passing by who hasn’t been touched in some way by one of his movies”.  Guido responds “that the only movie he could make now would be about a man trying to win back his wife”.  To which Judi says “Sounds perfect, the costumes might not be so bad too”.

The film ends with Guido back on set saying “Action”.. 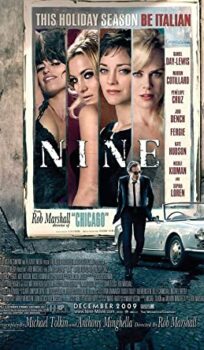