Moss (Brolin) is ambushed and killed by the Mexicans looking for their money. Chigurh (Bardem) murders many, many people, including Woody Harrelson’s character and his character’s boss (a very young-looking Steven Root) before finding the money (implied, not shown). He then murders Moss’ wife (off-screen and chillingly conveyed later when he looks at the bottom of his boots as he leaves her house). He’s involved in a terrible car crash leaving the scene, but he just limps away. Tommy Lee Jones’ sheriff retires to get away from all the bloodshed. 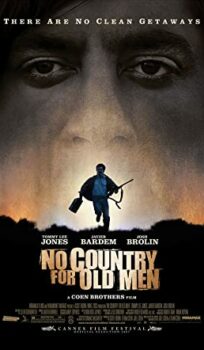