Pooper:
Colin Evans (Idris Elba) did not end up at the home of Terry (Taraji P. Henson) by accident, as the movie had led you to believe. Her husband had been having an affair with Colin’s ex-fiance and the whole thing has been part of Colin’s plan for revenge. Terry manages to hide her children, get a message to her cheating husband to call the police, and finally manages to shoot Colin to death after an intense struggle. She leaves her husband, moves, and hires a nanny so she can go back to work as a lawyer.

Longer version:
Colin Evans was convicted of manslaughter after police were unable to find enough evidence to prove he murdered five women. When his parole is rejected, Colin escapes and kills his ex-fiance Alexis when he finds out she has been seeing another man.

Terry’s husband is going out of town to take his father for a birthday golf weekend, leaving her with the kids. Terry’s friend Meg (Leslie Bibb) promises to come over for a girl’s night because Terry is frazzled with motherhood, a distant husband, and the loss of her promising legal career to be a stay-at-home mom.

A big storm comes as Colin is driving, causing him to skid out of control and crash in the woods just off of the road. He goes to Terry’s house, where she is alone with the kids. Terry is at first cautious, and makes Colin wait on the stoop while he pretends to call a tow truck. He tells her the truck may take a while because of the storm. Terry is still cautious, but Colin acts polite and is clearly bleeding from his forehead, so she lets him in to wait.

Colin and Terry talk. Colin gets very flirtatious and gets Terry to admit her marriage isn’t doing so great, and that she misses her career as a District Attorney (specializing in defending abused women). Colin keeps flirting, but she won’t let things go any further. Terry’s car alarm is broken and goes off randomly, and the beeper on her key ring doesn’t work (remember that), so Colin helps her disarm it and they return to the house.

Meg arrives with a bottle of wine and begins flirting with Colin, quickly uncovering some holes in his cover story and becoming suspicious. Terry’s baby begins to cry and she goes upstairs to get him back to sleep.

Colin goes out to the garage to smoke, subtly getting Meg to follow him. He tries to convince Meg that he’s been having an affair with Terry and the broken down car story was a sham–and that Terry doesn’t want Meg’s friendship anymore so she should go. Meg points out all the flaws in his stories and begins to storm inside to tell Terry when Colin hits her in the face with a shovel and leaves her bleeding profusely on the floor.

When she comes back downstairs, Terry is suspicious that Meg is just gone. Colin says she ran home, but Terry sees Meg’s umbrella and coat hanging by the front door. Things escalate from there as Terry tries several times to incapacitate Colin and get her daughter and baby out of the house, but she cannot accomplish all of those things before Colin comes back and stops her. When she finally manages to call the police through a fax line, Colin forces her at gunpoint to pack up the children and drive them all away. Terry sees Meg’s lifeless body in the garage as they leave.

Terry tries to signal a police officer at a stoplight by flashing her headlights. The officer pulls them over, but Colin gets her to lie to the officer by holding her baby and threatening his life. When the officer becomes suspicious anyway, Colin shoots and kills him.

Colin guides Terry to a specific house, which turns out to be Alexis’ when Terry stumbles upon her body. Colin makes Terry put the kids to sleep in a bedroom. Terry’s car alarm goes off again, so Colin ties her up next to Alexis’ body to go out and fix it before the neighbors become alerted.

A cell phone rings and Terry sees Alexis’ phone left where it fell under her bed. Terry finds a shard from a broken lamp and cuts herself loose to answer the phone. It’s her husband, calling to ask where Alexis has been because he’s been waiting at their hotel room all night. Terry realizes that Colin has been doing all this to get revenge because her husband was having an affair with Colin’s ex-fiance.

Terry tells her husband that his girlfriend is dead and she needs him to call the police before hanging up and gathering the kids. She tricks Colin into thinking they left the house when he comes back from fixing the alarm, then hides her daughter in a closet with the baby and grabs a knife from the kitchen. Colin is lurking outside in the yard looking for them. Terry goes upstairs and when he comes back inside she makes a noise to distract him from the closet where her kids are hiding. They fight, but Terry finally manages to get Colin’s gun and shoot him several times, causing him to fall out a window.

The police arrive. Terry’s husband drives up and tells her it’s not what it looks like. Terry punchs him in the face and walks away.

Fade in on Terry moving into a brand new townhouse across from a park just outside Atlanta. She has left her husband and is starting over. She looks sadly at a framed photograph of her and Meg when a nanny appears with the kids to take them to the park. Terry says she’ll walk them over on her way to the courthouse (she’s gone back to her powerful legal career). 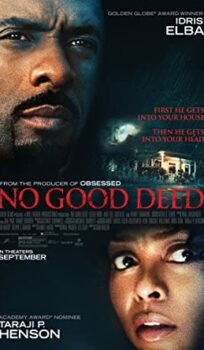