SHORT VERSION:
Shortly after Zeus attacks and hospitalizes his brother Randy one night, Rip accepts a match against him at another Battle of the Tough Guys event, scheduled to be held in a studio in Brell’s World Television Network building. However, Rip’s love interest Samantha gets kidnapped by Brell’s men before the show starts, which the wheelchair-bound Randy and his friend Craig witness and report to Rip. Brell then calls Rip and confirms that he has Samantha, and under threat of having her be harmed like Randy, he orders Rip to throw the fight after ten minutes of action. Craig and Rip’s trainer Charlie immediately set out to find her.

Samantha is able to get away from her captors and escape down an elevator to the studio’s floor, but the villains catch up to her. Thankfully, Charlie and Craig appear and subdue them before bringing her to ringside. After seeing that Samantha is alright, coupled with seeing Randy move his hand on his own and seeing Zeus attack Charlie, Rip gets his second wind and starts to beat up Zeus, and a disbelieving Brell goes berserk and trashes the nearby control room he is in. Rip ends up winning after sending Zeus off a catwalk right into the center of the ring, which collapses on impact and knocks him out cold. Rip then goes after Brell, and as Brell backs away in fear, he grabs some live wires and is fatally electrocuted. Rip returns to ringside to celebrate with his family, friends, and the crowd.

LONG VERSION:
While Rip (Hulk Hogan) is making an appearance at an outdoor charity event, Zeus (Tom “Tiny” Lister, Jr.), Brell (Kurt Fuller), and the latter’s lackeys Ordway (Charles Levin) and Unger (David Paymer) show up in a helicopter, and Zeus walks straight up to Rip. Brell tells Rip that Zeus is still awaiting his answer to the challenge he issued him on TV, and when Rip doesn’t respond, Brell considers this to be a “no” and tells the crowd and news reporters on hand that, by Rip’s refusal, this means that Zeus is the undisputed champion of the world. Brell, Zeus, and the others then re-enter the helicopter and fly away. Rip talks to his trainer Charlie (Bill Henderson) that night about the incident, and Charlie commends him for not resorting to violence in order to set a good example for the many children that were present, but Rip says he thinks that everyone believes he backed down. The next day, Brell tries to get revenge on Samantha (Joan Severance) – the corporate spy he hired to seduce Rip – for defecting to Rip’s side by sending a criminal after her to attack and rape her, but Rip rescues her before she can be penetrated and knocks the criminal out.

That night, Rip’s younger brother Randy (Mark Pellegrino) and his friend Craig (Patrick O’Bryan) go to one of Brell’s Battle of the Tough Guys events to see Zeus in action, and after they watch him dominate his latest opponent, they end up running from him along with some other spectators when he advances on them. However, Randy and Craig collide with Brell, Ordway, and Unger just after they have stepped out of a production van, and after Brell has security guards seize them, he notices Randy wearing one of Rip’s T-shirts and remarks that Zeus has lured a Rip fan over to him. Randy tells him that neither he nor Craig care for Zeus, but then Craig identifies Randy as Rip’s brother as a means of reinforcing this fact. Brell has the security guards force Randy and Craig to meet Zeus, and after Brell informs Zeus who Randy is, Zeus tells him that Rip is a coward and that he is going to kill him. Randy responds by hitting him with a few punches, but they all have no effect, and Craig gets knocked out by Brell while Zeus administers to Randy a beating so vicious that it hospitalizes him. After Rip finds out about it, he goes to Zeus’ gym and starts smashing various things in a rage, with Brell taunting him over the P.A. system. Rip demands a fight with Zeus, but Brell tells him that that will be on his terms. Eventually, Rip agrees to a match against Zeus in two weeks at another Battle of the Tough Guys event that will be held in one of the studios of Brell’s World Television Network building, though he spends all of that time helping Randy with his rehabilitation instead of training.

On the night of the show, Samantha, Craig, and a wheelchair-bound Randy and his girlfriend arrive on the floor of the building where the studio is, but then security guards posted at the elevator allow Randy and Craig to pass before suddenly forcing Samantha into the elevator with them and then bringing her into a viewing room upstairs where Ordway and Unger are waiting. After they telephone Brell and let him know that Samantha is with them, Brell calls Rip in his dressing room just after Randy and Craig have alerted him on what happened to Samantha, and he orders Rip to make the match look good for ten minutes before throwing it or else Samantha will meet the same fate as Randy. After hanging up, Rip tells Charlie that he has ten minutes to find her, and Charlie then departs along with Craig.

As Zeus is brutalizing Rip, Samantha notices that Ordway, Unger, and the guards are all preoccupied with watching the match and uses this opportunity to escape, but the antagonists notice this seconds later and go out to search for her. They spot her getting into an elevator, so they run down to the studio floor and succeed in getting there before the elevator arrives, but thankfully, Charlie and Craig show up before the villains can do anything to her and knock them all out. Samantha, Charlie, and Craig then get to ringside, and after Rip sees that Samantha is alright, then sees Randy managing to move his hand on his own, and then sees Zeus attacking Charlie, he gets his second wind and begins to overpower Zeus, and the fight spills out into the stands and up onto a catwalk. As a disbelieving Brell goes berserk and tears apart the control room he is in, Rip dominates Zeus before nailing him with his axehandle finishing move to send him flying off the catwalk and into the center of the ring, which collapses upon impact and knocks Zeus out cold. Rip then turns his attention to Brell and breaks into the control room, but while screaming for Rip to stay away from him, Brell grabs hold of some live wires and fatally electrocutes himself.

As the crowd cheers wildly for Rip, he makes his way down to his family and friends and celebrates with them. 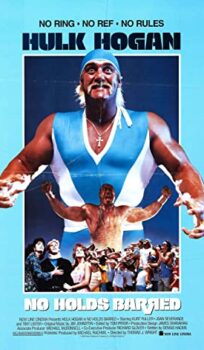