Kate is an extraordinary chef at a restaurant run by Paula (Patricia Clarkson). She is a workaholic and devotes her life to perfecting recipes. Even her visits to her shrink revolve around food. Her sister and niece are in a car accident when coming to visit her which results in her sister’s death. Kate must take Zoe in to fulfill a request that her sister had written her in case anything should ever happen. Kate knows nothing of children and has a hard time relating to her niece. Although she is on leave from the restaurant (due to her sister’s death), Kate can’t stay away. On one of her unannounced visits she meets Nick, a talented chef with a love for opera and a lot of charisma. Kate hates him right off the bat. He tells her he has taken the job in order to work with her but won’t continue unless she approves it.

Eventually she agrees (mostly due to the kitchen staff looking worried that he might leave). Meanwhile, at home Zoe is frightened to be alone and the babysitters that come to the door look like they are straight out of a Gothic club. She decides to take Zoe to the restaurant, where Zoe forms an attachment to Nick.

After forgetting Zoe at school one day, Kate tells her she will grant any wish that Zoe desires to makeup for it. Her wish is for Nick to come over and cook Italian for them. This dinner kindles the love-match between Nick and Kate. Nick plays hard to get at first, but in the coming days the two fall in love and are inseparable. All is well until Paula asks Nick to stay on permanently and Kate begins to feel threatened. The two breakup but are thrown together again when Zoe runs away (because Nick won’t come around anymore). Kate learns that Nick has taken an executive chef job in San Diego. She is devastated and swallows her pride in order to beg him to stay.

The ending scene is Kate and Nick cooking side by side in a restaurant they obviously run together with Zoe playfully helping them. 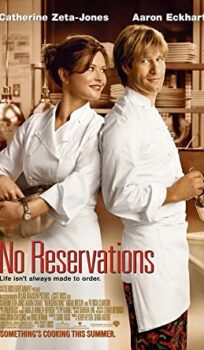