Emma (Natalie Portman) and Adam (Ashton Kutcher) have known each other since they were kids at camp. When they meet up again 15 years later, Emma is a doctor and Adam works for a TV show.  Emma is a commitment-phobe but is attracted to Adam so the two begin a strictly-sexual relationship.  When Adam confesses to Emma on Valentine’s Day that he loves her, she gets angry and Adam decides to break it off completely.

Weeks later on the eve of  Emma’s sister’s wedding, Emma calls Adam to tell him that she misses him.  He tells Emma that she is just feeling lonely and nothing has changed between them.  Emma drives over to Adam’s house only to find that he has moved on and is with one of his coworkers, Lucy.  But the two aren’t really together and when Adam gets a call that his father Alvin (Kevin Kline) has been hospitalized, he goes to see him and make amends (earlier in the movie it was revealed that Alvin is dating Adam’s ex-girlfriend).  After leaving Alvin, Adam calls Emma to tell her that if she really wants to be with him, she should tell him in person, not on the phone or via text. At that moment, she drives up to the hospital because she had heard that Alvin was ill.  The two pledge their love and work on having a real romantic relationship. 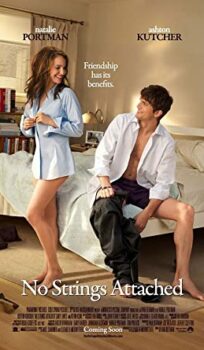