James Bond (Daniel Craig) is living in peace with Madeleine Swann(Léa Seydoux), but they are attacked by assassins believed to be working with SPECTRE, so Bond distrusts Madeleine and parts ways with her.

Five years later, he is retired from MI6 and living in Jamaica but is called upon by Felix Leiter when a scientist, Valdo Obruchev, is abducted, along with a bioweapon designed by MI6 called Heracles. The villainous mastermind here is Lyutsifer Safin (Rami Malek), a terrorist who wanted revenge against SPECTRE because Madeleine’s father, Mr. White, murdered Safin’s family when he was a child.

While in Cuba, Safin has Obruchev, who is working under him, use DNA of SPECTRE operatives to kill the entire organization when they appeared to be targeting Bond, as he is there with another CIA operative, Paloma, to recover Obruchev, while the new 007, Nomi, is there for him. Bond gets Obruchev first, but Felix is killed when it turns out his colleague, Logan Ash, is working with Safin and Obruchev to distribute Heracles to targets around the world based on their DNA components. Bond rejoins MI6 to interrogate Blofeld, whom he believes to be responsible for things, but after reuniting with Madeleine, Blofeld dies after Bond touches him and unknowingly poisons him. This is because Safin got to Madeleine first and infected her with Heracles and then passed it to Bond during the interrogation. He later tracks Madeleine down and finds that she has a daughter named Mathilde, who is obviously Bond’s, but Madeleine denies it. Ash and other assassins sent by Safin go after Bond, Madeleine, and Mathilde. Although Bond kills Ash and the assassins, Madeleine and Mathilde are captured.

MI6 honors Bond’s memory while Madeleine takes Mathilde to Matera to live in peace, and Madeleine begins to tell Mathilde the true story of her father. 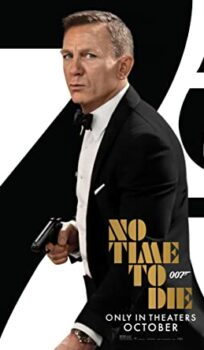