After accidently helping Rasputia’s brothers (Larry ‘Rasta’ Speight, Terry Crews, and Clifton Powell) hustle the orphanage away from Kate (Thandie Newton), Rasputia (Eddie Murphy) jails Norbit (Eddie Murphy) in the house, threatening to kill Kate if he talks to her again. Norbit works up the courage to stop Kate’s wedding to Deion (Cuba Gooding, Jr.) before he is entitled to her money.

He finally gets there, after some stalling from Lord Have Mercy and Pope Sweet Jesus (Katt Williams & Eddie Griffin respectively), and reveals Deion and Rasputia’s plans to steal the orphange, and Deion scamming women. Deion’s ex-wives show up and runs after him. The brothers go after Norbit to kill him and the town stands up to them after years of bullying. Mr. Wong (Eddie Murphy) spears Rasputia in the ass which makes her run off and the rest of the town chases after her brothers.

In the end, Norbit and Kate get married and buy the orphange. Rasputia and her brothers move to Mexico and start their strip club there, but hardly receive customers because their headlining stripper is Rasputia. 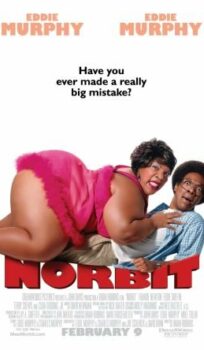