Submitted by Curt (Pooper) and Evan B (Long)

Long Ending:
Roger O. Thornhill (Cary Grant) is a shallow, twice-divorced  advertising executive who loves to live a life of luxury and self-satisfaction. One day, while in the bar of a hotel lobby, two thugs mistake Roger Thornhill for a man named George Kaplan and subsequently abduct him at gunpoint. They take him to the estate of a man purporting to be an official at the United Nations named Lester Townsend. Thornhill vociferously argues that he is not George Kaplan, but to no avail. He is interrogated by Townsend and Townsend’s right-hand man Leonard (Martin Landau), who accuse him of being a secret agent that has been tailing them. Leonard then forcibly intoxicates Thornhill and tries to stage his death in an “accidental” car crash. Thornhill manages to escape and is soon arrested by the police for drunk driving.

Thornhill tells the story of his abduction, but nobody believes him. It doesn’t help that Townsend’s “wife” says that Thornhill simply showed up drunk at their house for a dinner party. Unsatisfied with the police work, Thornhill takes matters into his own hands. He breaks into George Kaplan’s hotel room and finds clothes and toiletries, but no hotel employees have ever seen Kaplan enter or exit (indeed, they assume Thornhill is Kaplan). Thornhill goes to confront Townsend at the U.N. building, only to discover that the man who interrogated him is not Townsend and that the real Townsend is also not married. Before Thornhill can try to get any answers from the real Townsend, one of Lester’s goons throws a knife into Townsend’s back and kills him. Nobody sees the knife-thrower, but they do see Thornhill standing over Townsend’s dead body. Thornhill flees from the scene, now wanted for murder. In actuality, the man who claimed to be Townsend on the night of Thornhill’s abduction was a foreign spy named Phillip Vandamm (James Mason).

The film cuts away to a spy agency where the heads of the agency realize that Vandamm believes Thornhill to be their spy, George Kaplan. They discuss the fact that George Kaplan simply doesn’t exist and the agency made him up so that Vandamm would not realize that they had an agent already infiltrated into his inner circle (thus, why nobody ever actually saw Kaplan). They decide to let events play out without intervening as Vandamm’s focus on Thornhill will only serve to strengthen their ruse. They acknowledge, the fact that Thornhill may be killed as a result of their artifice, but decide Thornhill’s sacrifice would be in the interest of preserving national security.

Thornhill boards a train to Chicago, having learned that “Kaplan” has a hotel room there. The police suspect he is on the train and they begin searching the cars for him. Thornhill happens to meet an alluring woman named Eve Kendall (Eva Marie Saint) who recognizes him as a wanted criminal, but professes to believe his innocence. She hides Thornhill in her room on the train and the two end up making passionate love. It turns out that Eve is actually Vandamm’s mistress and has seduced Thornhill in order to lure him into a trap. When they arrive in  Chicago, Eve claims to have reached out to Kaplan (by looking him up at his hotel) and tells Thornhill to meet Kaplan at a desolate bus stop in the countryside outside the city. The ruse was a set-up by Vandamm, and when Thornhill arrives at the meeting place, he is attacked by a gun-man flying a crop-duster plane. Thornhill manages to escape with his life when the crop-duster accidentally collides with a gas truck while soaring in low to try and shoot him.

Thornhill makes his way back to the city and discovers that Eve is Vandamm’s mistress. He tracks the pair to an auction where Vandamm purchases a statue. Vandamm admits he is a spy and that Eve works for him, but gloats that Leonard will never let him leave the auction alive. Vandamm also tells Thornhill that he will be leaving the country from South Dakota in several days, at which point no one will ever catch him. Vandamm also realizes that Eve has genuine feelings for Thornhill. Vandamm and Eve leave with their statue while Leonard lies in wait for Thornhill. Understanding the peril he is in, Thornhill causes a scene at the auction that leads to his arrest. He is safely escorted past Leonard by the police and intends to tell the police about Vandamm’s plans.

Instead, the police take him to the airport where he boards a plane headed for South Dakota. He is met by a member of the spy agency named the Professor (Leo G. Carroll). The Professor tells Thornhill that Eve is the double agent that has infiltrated Vandamm’s operations, but that Vandamm may kill her since he knows she has genuine feelings for “Kaplan” and therefore,can no longer trust her. Thus, they need Thornhill to work for them so that they can safely extract Eve. Realizing he truly loves Eve and has endangered her life, Thornhill agrees.

Thornhill sets up a meeting with Vandamm, Leonard, and Eve, where he admits to being Kaplan. He says he will let Vandamm and Leonard leave the country so long as he can arrest Eve and pin Vandamm’s crimes on her (essentially, he claims he wants revenge on Eve for playing him). Eve protests the arrangement and shoots Thornhill, leading Vandamm to believe that Eve is both completely loyal to him and that he has nothing to fear from Kaplan any longer. In reality, Eve’s gun was loaded with blanks and Thornhill is alive and well.

The Professor tells Thornhill that the agency has changed its plans and now intends to let Vandamm and Leonard leave the country with Eve so that they can continue to monitor his activities. The Professor lets the two lovers share a tearful good-bye before Eve drives off to meet Vandamm. Thornhill refuses to let Eve spend more time in danger and he escapes from the Professor and goes to rescue Eve. Vandamm’s house is on top of Mount Rushmore, and the villains are planning the details of their departure (they have built a landing strip on the top of the mountain for a plane to come meet them). The two will be smuggling U.S. secrets to their home country inside the statue Vandamm purchased at auction.

Thornhill arrives at the house and begins eavesdropping. While Eve is packing in her room, Leonard tells Vandamm that Eve is a double-agent and didn’t actually kill Thornhill/Kaplan. He proves it by shooting Eve’s gun at Vandamm, demonstrating the gun was loaded with blanks. The pair then devise a plan to kill her on the plane and dump her body into the ocean. Thornhill sneaks into the house, writes a note warning Eve of her blown cover on the back of one of his monogrammed matchbooks, and leaves it in a place she can find it. Though alerted that her cover is blown, Eve can’t find a way to get out of entering the plane without causing Vandamm to kill her immediately. Meanwhile, Vandamm’s maid/one of the thug’s wife (who it turns out, posed as Townsend’s/Vandamm’s wife earlier in the film) finds Thornhill and holds him at gunpoint. Thornhill realizes she is holding the gun filled with blanks, so he runs out of the house to stop Eve from getting on the plane. Taking the villains by surprise, he manages to grab Eve and the statue, and the two run to the Mount Rushmore monument.

There is then a chase scene up and down the heads of Mount Rushmore. Vandamm attacks Thornhill, but eventually falls over the side to his death. Thornhill watches as Eve is pushed off the cliff by Leonard, but she manages to grab on to a ledge. Thornhill manages to grab her hand, but can’t pull himself and Eve up to safety. He begs Leonard to help them, but Leonard walks over and begins crushing Thornhill’s hand under his foot. Fortunately, Leonard is fatally shot by the Professor and other members of the agency, who arrived just in time to save the two. Thornhill pulls Eve up from the ledge . . . and into his bed. The film has cut ahead to where we see Eve and Thornhill are married and once again on a train. The lovebirds embrace, and prepare to have sex. The camera cuts away to show the lovebirds’ train entering a tunnel. 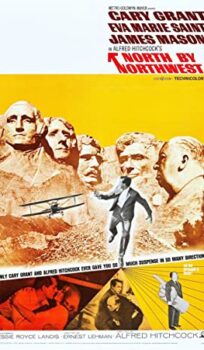