The North Dallas Bulls play against Chicago in the conference championship game. The Bulls’ star receiver Delma Huddle has a painful injury, and won’t take a injection of painkillers, so the coaching staff puts Phil Elliot (Nick Nolte) in the starting lineup, since he’s never hesitated to take whatever drugs he’s told to take. Elliott doesn’t realize that the coaching staff is merely using him to manipulate Huddle into taking the painkillers. When Huddle agrees to let the trainer inject him with anesthetics, Elliott goes back to being a benchwarmer.

The game is played on a wet, muddy field. There is little scoring, as the defenses dominate. A Chicago defensive lineman named Weeks repeatedly pushes the Bulls’ blockers around and sacks quarterback Seth Maxwell (Mac Davis).

During their final possession, the Bulls trail by 7 points. They need a touchdown and an extra point to tie the game. During a time-out, Maxwell convinces coach B.A. Strothers (G.D. Spradlin) to put Elliott in the game. In the huddle, Maxwell tells linemen Joe Bob (Bo Svenson) and Shaddock (John Matuszak) to break Weeks’ leg, if they must. Shaddock and Joe Bob follow orders perfectly; they chop block Weeks, injuring his leg and knocking him out of the game. On the next play, Delma Huddle, who can’t feel his leg, is hit and severely injured.

With time running out, Maxwell throws a touchdown pass to Elliott. All the Bulls need to do is kick the extra point to tie the score and send the game to overtime. But the extra point attempt fails, when holder Art Hartman (the ostentatiously Christian backup quarterback) fumbles the snap. Chicago wins the championship game.

In the locker room, offensive coach Johnson (Charles Durning) chastises Joe Bob for not studying Weeks’ tendencies enough. This enrages Shaddock, who launches into an obscene rant against coaches, who he thinks have drained all the fun and emotion out of football and turned it into a business.

The next day, Elliot visits his girlfriend Charlotte (Dayle Haddon) at her ranch, and tries, semi-successfully, to explain to her why he needs football, even though it’s brutal and seems to go completely against his values. Elliott tells her that, whenever he gets to make a great catch, the high he feels is worth all the pain and aggravation he goes through.

Shortly afterward, Elliott is called to a meeting with the team owner, Conrad Hunter (Steve Forrest), B.A. Strothers, and a team of investigators from the league office. Elliott had been under surveillance by an off-duty Dallas policeman who took pictures of Elliott smoking marijuana. The owner uses this as a pretext to suspend Elliott without pay. Elliott responds by angrily quitting. As he leaves the owner’s office, Elliott recalls B.A.’s quote from an epistle of St. Paul: “When I became a man, I put aside childish things.”

Outside the building, quarterback Seth Maxwell is waiting for him. Maxwell clearly knew what was going on inside, and thanks Elliott for not revealing any of Maxwell’s own scandals. As Elliott walks away, Maxwell throws him one last pass, for old times’ sake. Elliott lets the ball bounce off his chest, and doesn’t try to catch it- which indicates that Elliott is ready to give up football for good. 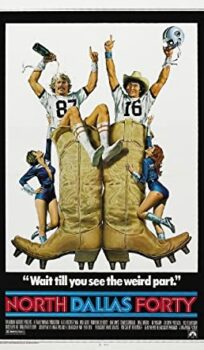