Submitted by Matthew and Laura

Short Version:
Four climbers, two from Austria and two from Germany, attempt to climb the North Face of Eiger in 1936.  All of them die during the attempt, including Toni Kurz, who in the end dies a few meters from his rescuers, dangling from a rope.

Extended Version:
After Willy Angerer is accidentally hit by a falling rock he receives a serious head wound, impairing his judgement and coordination. His condition becomes steadily worse as time progresses.  Toni and Andy decide to sacrifice their attempt on the summit to get Willy back down. A big storm comes up the mountain, impeding their attempt to get Willy back to safety.  Toni realizes the critically placed traverse rope was removed by Willy on the way up.  It has be put back in place. Andy tries to do that but he is too weak, and fails.  An avalanche causes Edi to smash his head on a rock, killing him.  Andy tries to pull himself back up the rope to reach Toni but fails; he cuts his rope sending himself and Willy down the mountain to their deaths. Toni is now the only living climber of the four, he is badly frostbitten and dying. Luise pleads with a rescue team to save him. Reluctantly they go up the mountain in the night with the storm still blowing. They cannot reach him and he spends the night exposed on the mountain side. The next day they go back up and are able to get him their rope so he can belay himself down to their ledge to be rescued. Unfortunately the rope is too short and so two ropes must be knotted together.

He belays himself down to a position about 40 feet above their ledge. The knot tying the two ropes together catches on his carabiner, preventing him from going any further. If he could pull his weight off the knot, it could slip through and he could lower himself to safety. Unfortunately, he is too weak and so soon dies of exposure and trauma, within sight of his rescuers.

Luise does not return to the newspaper in Berlin. She continues her photography with a newfound appreciation for the fragility of life. 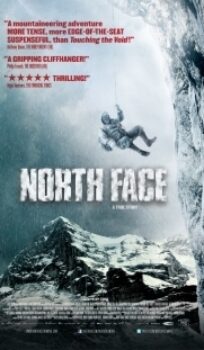