SHORT VERSION: Rick makes it through the first day of the Pipeline World Classic, but on the second day, he gets eliminated when the competitive and materialistic Burkhart pulls his leash on his surfboard as he is getting up to ride the final wave of their heat, making him fall off of it. However, he is spotted and photographed doing it, and though Chandler wants to file a protest with the judges over it, Rick tells him not to bother, for he is a “soul surfer” like him and therefore knows that this contest doesn’t really mean anything. After this, he gets an acknowledgement of respect from Vince, a surfer he was at odds with for most of the movie.

Later that day, Chandler takes Rick to the airport so he can catch his flight back to the mainland, and bids him a fond farewell and gives him the surfboard he used in the contest as a souvenir. As he is about to board his flight, Turtle and Kiani show up to see him off. Rick kisses Kiani goodbye, and Turtle shows him a newspaper article that tells of how Burkhart was caught cheating. Before he goes, Rick promises them that he will be back.

LONG VERSION: Under Chandler’s (Gregory Harrison) tutelage, Rick (Matt Adler) becomes a very good surfer, so much so that he draws the attention of the Professor (John Paragon), a surfing photographer. After taking some shots of Rick in action, he comes up to him and tells him that he can get him into the surfing magazines, but he first must enter and do well in a big contest, such as the upcoming Pipeline World Classic. Rick signs up for it, much to Chandler’s annoyance, as he is a “soul surfer” and therefore looks down his nose at surfing contests.

Rick has a fantastic run on the first day, becoming one of the sixteen amateurs to make it to tomorrow’s main event, where they will be pitted against pro surfers – such as the competitive and materialistic Burkhart (Laird Hamilton) – for the championship. He then spends an intimate night with Kiani (Nia Peeples), and the next morning, he proposes that she come and live with him in New York while he attends art school there, but she sadly turns it down.

At the main event a few hours later, Rick spots Chandler among the spectators and talks to him. Chandler says that he is here because he has customers to deal with, and though he re-iterates to Rick that contests mean nothing, he is pleasantly amazed that he made it this far. In his first heat, Rick finds himself competing against Burkhart, along with Alex Rogers (Robbie Page) and Derek Ho (himself). With two minutes remaining in the heat, the waves stop coming in, and Alex and Derek have ridden four waves while Rick and Burkhart have ridden three. When the clock gets down to the last thirty seconds, Alex and Derek overconfidently head back to the beach, believing that they have won it, but a wave emerges seconds later. Both Rick and Burkhart start paddling towards it, with Rick having the inside advantage, but before he can get up on his board, Burkhart pulls his leash and makes him fall off, eliminating him and allowing him to ride the wave instead. However, he doesn’t realize that Vince (Gerry Lopez) – whom Rick was at odds with for most of the film and is one of the contest’s referees – saw him do it, and that the Professor had photographed it.

Back on the beach, Chandler confronts Burkhart over his dirty act, and Vince backs him up, but before Chandler can take Rick over to the judges to file a protest, Rick stops him, saying that he is a soul surfer and thus this contest doesn’t really mean anything. Some of the other spectators who saw what Burkhart did turn on him, and Rick finally gets an acknowledgement of respect from Vince.

Later that day, Chandler takes Rick to the airport so he can get his flight back to the mainland, and bids him a fond farewell and gives him the board he used in the contest to keep as a souvenir. As he is about to board his flight, Turtle (John Philbin) shows up to see him off, and Kiani is with him. Kiani tells Rick that she hopes he comes back someday and kisses and hugs him goodbye, and Turtle then shows him a newspaper article telling about how Burkhart was caught cheating. Before Rick goes, he assures the two of them that he will be back. 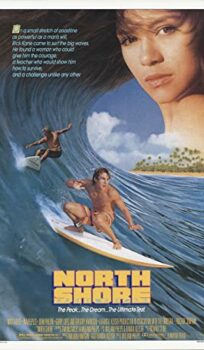