After Sheba (Cate Blanchett) attends her son’s play instead of staying to console Barbara (Judi Dench), who is grieving over the death of her cat, Barbara reveals to another teacher that Sheba has been having an affair with 15-year-old student Stephen Connolly. The news spreads, and while journalists are hounding Sheba, and Sheba’s marriage and family life are descending into chaos, the school principal, suspecting Barbara of having allowed the crime to go on by keeping silent, forces Barbara to take an early retirement by threatening to expose Barbara’s previous destructive relationship with another younger woman.

Because Sheba’s husband wants her to move out for a while, Sheba goes to stay with Barbara (which delights Barbara). But, while there, Sheba finds Barbara’s diary and discovers the other woman’s betrayal, whereupon they have a violent confrontation. Sheba storms out theatrically, in possession of the diary, but the frenzy of reporters and photographers outside the house daunts her, and Barbara goes to her rescue, bringing Sheba back indoors

Later, Sheba goes home to her husband and to face her actions, and newspapers announce that she’s been condemned to 10 months in prison.

At her favourite park bench, Barbara starts up a conversation with another young woman about the article, and invites her to a concert. 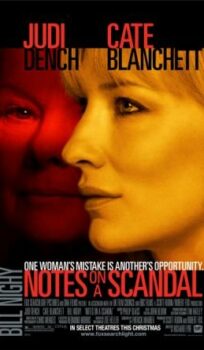