Pooper:
NAC the lion man destroys Dr. Mindskull and frees the alien girl from her prison. Although NAC appears to die from injuries sustained during the battle, the alien girl uses her powers to bring him back to life.

Long Ending:
An evil scientist named Dr. Mindskull (voiced by Nick DiLiberto) develops animal-human hybrids and uses this army to try and take over the world. Although Mindskull causes much destruction, the human military is able to reach a stalemate with his forces.

The human military learns that Mindskull is developing a weapon that will give him the edge in the war. They track down a massive lion man referred to as NAC (a neo-animal combatant), who is Mindskull’s brother. After capturing NAC, the humans force him into servitude and use him to infiltrate Mindskull’s lair. There, they find a green-skinned girl bound inside a pod and deduce she must be integral to Mindskull’s plans. The soldiers try to destroy the girl, but NAC manages to break free from his restraints and rescue her. NAC feels a close bond with the girl though they’ve never met. Meanwhile, Mindskull sends a beetle-man to recover the girl as she is indeed the key to his plans to win the war.

NAC and the girl grow closer, and she displays the ability to control plantlife. Eventually, Mindskull’s minion manages to recover the girl and brings her to Mindskull’s castle. NAC pursues and confronts his brother. Mindskull explains that the girl is from another planet, that he captured her when she arrived on their planet, and has been mixing his own blood with the girl’s (explaining why NAC felt connected to her). Before NAC can do anything, Mindskull activates a process that allows him to control the girl’s power. Mindskull morphs into a massive plant creature, places the girl in a prison cell on his giant body, and begins decimating the human’s forces.

NAC attacks his now-monstrous brother and suffers severe injuries. He finally finds the girl. Using his remaining strength, NAC manages to break the girl out of her prison. With his power source freed, the Mindskull monster disintegrates and the humans celebrate their unlikely victory. NAC falls into the ocean and washes onto a beach before succumbing to his injuries. However, alien flowers sprout up around his dead body, and the movie ends with NAC returning to life thanks to the girl’s powers. 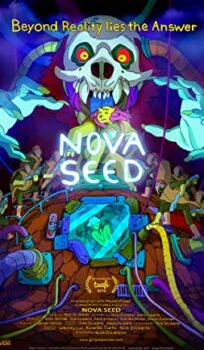