The girls find out that Johnny and his mother were murdered, and the murderer was never found. Roberta (Christina Ricci) then breaks down over her dad lying to her about how her mother died, and Samantha (Gaby Hoffmann) admits that her parents are getting divorced. They decide that they can only count on each other, so it was then that they made their pact to always get together whenever they needed each other’s help.

They hold a séance in the graveyard that night to talk to Johnny and find out who killed him, but are interrupted by a graveyard worker placing a new headstone for Johnny. It turns out the worker had put the crack in Johnny’s headstone, due to accidentally hitting it with his tractor, and Johnny never rose from the grave. The girls decide to hold no more seances, but as they are leaving, they spot Crazy Pete (Walter Sparrow).

Samantha decides to stay while the others leave, ostensibly to get something she forgot, but in reality so she could talk to Pete. She sees him standing in front of Johnny’s grave and realizes that he is Johnny’s father. He expresses his regret for not being there when his family was killed, and for wasting his life by being afraid to face both others and himself. In light of these things, he tells her that although things will happen in her life that she can’t stop, it wasn’t a reason to shut out the world.

The girls eventually get the clubhouse moved into the tree. In the present, Chrissy (Rita Wilson) goes into labor and later gives birth to a baby girl. Later on in the clubhouse, Tina (Melanie Griffith) mentions to them that she sent money to Crazy Pete every Christmas until he died, and Samantha (Demi Moore) finally reveals to them that Crazy Pete was Johnny’s father. They soon make a new pact to see each other more often. 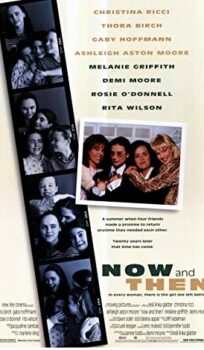