The Horsemen (Jesse Eisenberg, Woody Harrelson, Dave Franco, Lizzy Caplan) fool the bad guys (Walter Mabry and his father, Arthur Tressler, played by Daniel Radcliffe and Michael Caine, respectively) by setting up a fake airplane flight, all in a giant set on the Thames and witnessed by thousands, including the FBI who arrests Mabry and Tressler. 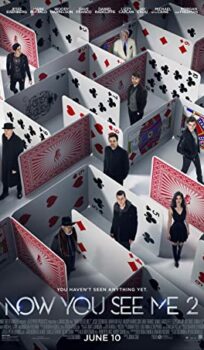