Jerry Landers (John Denver) is a mild-mannered assistant supermarket manager who one day receives a note claiming to be from God, asking him to come see Him for an interview.  Jerry thinks it’s a joke and throws it away.  But when the note keeps reappearing in unusual places, Jerry goes to the interview.  He goes into room that only contains a chair and an intercom.  The voice on the intercom claims He is God.  Jerry still thinks it’s a prank, especially when God tells him that he is in a room that He created right then, because it’s on a non-existent floor of the building.  He tells his wife Bobbie (Teri Garr) about the strange interview with man claiming to be God, but she thinks he’s acting crazy.  The next day, God (George Burns) appears to Jerry in his bathroom, and explains to him that He wants Jerry to spread His message:  the world can work with what God’s given us.  Jerry had been skeptical about God’s existence but His appearance in the bathroom, coupled with God making it rain inside Jerry’s car, convinces him that He is real.  Bobbie is still convinced Jerry is crazy and wants him to see a shrink.

Throughout the movie, Jerry spreads God’s message through the newspapers, the network news, and an appearance on The Dinah Shore Show.  The message-spreading is causing problems for Jerry at home, though.  Bobbie still thinks he’s going crazy, his kids are avoiding him, and his boss at the supermarket is threatening to fire him.  When several religious crackpots appear at Jerry’s house, he begins to question whether or not it’s worth it.  God appears and tells him that He will take care of him.  Later, a group of religious leaders led by Reverend Willie Williams (Paul Sorvino) call on Jerry and give him a series of questions to ask God.  God meets with Jerry and answers all of the questions.  He also tells Jerry to tell Reverend Williams that he’s a terrible messenger of His word because he’s only cares about the offerings.  When Jerry returns the questions and tells the Reverend what God said, the Reverend promptly sues Jerry for slander.

At the courthouse, it looks like Jerry is going to lose the case and everything he owns.  Suddenly, God appears in the courtroom and tells everyone that he did indeed tell Jerry to spread His word and that the Reverend is terrible.  Bobbie immediately apologizes to Jerry for not believing him, and the judge throws out the case.  Despite being proven right, the supermarket fires Jerry anyway.  While driving home from the supermarket, God appears one last time and tells Jerry that he did exactly what He wanted him to do and was proud of him. 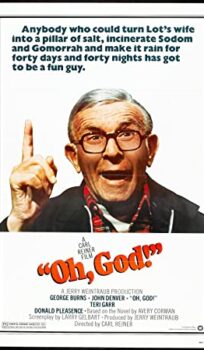