Olive Kitteridge (Frances McDormand) manages to alienate pretty much everyone in here life including her husband Henry (Richard Jenkins) and Christopher (John Gallagher).

Olive goes to see Christopher in New York with his new wife. Olive manages to alienate Christopher, who is still dealing with problems from his childhood and a difficult divorce from his first wife, to the point of estrangement.

Olive, when on getting home,  then learns that Henry had died the previous night. Olive then goes into a rage with the hospital staff

Olive then decides to commit suicide only to be stopped by a couple of children walking in the woods. Olive then comes to realize how much of a jerk that she has been.

Olive then learns of her first grandchild on the answering machine by Christopher’s wife. Olive then goes to see Jack. They both ponder the future. Whether they both will reconcile with their children is unknown. 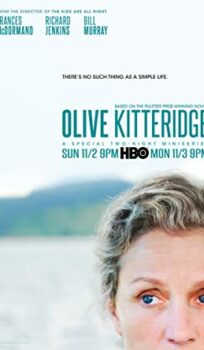