On Her Majesty’s Secret Service(1969)

Criminal genius Blofeld (Telly Savalas), has a fake allergy clinic in the Alps.  There, he brainwashed a group of beautiful women from all over the world.  They each have a makeup kit containing a deadly virus, which they will release if he commands.  Blofeld blackmails the UN.  The UN gives in to Blofeld.  However, Blofeld has made the mistake of kidnapping James Bond’s girlfriend and holding her in his hideout.  Bond (George Lazenby) violates orders and goes in to rescue her.  Bond is assisted by the girlfriend’s father, a mob kingpin.

Bond and his crew blow up Blofeld’s lair and rescue the girlfriend.  Bond marries the girlfriend. As they drive off on their honeymoon, a car speeds past.  It is Blofeld and his assistant, who survived the explosion.  They shoot at Bond, but kill his new wife instead.

The movie ends with Bond holding his dead wife in the car. 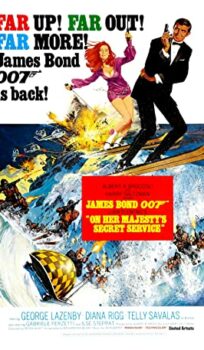