Ruth (Felicity Jones) declines the Government’s settlement proposal of paying $1 dollar to Charles Moritz (Chris Mulkey), claiming unconstitutionality, and brings the matter to the Court of Appeals. During their turn for oral argument, Ruth’s husband, Martin (Armie Hammer), overextends his allotted time and Ruth, while making valid key points -and dodging the deliberate provocation of the Hearing Judges in the process, something she was forced to train for previously-, spares four minutes for a rebuttal. At the same time, the opposing side, led by James Bozarth (Jack Reynor), retorts that the Government’s position “follows the American way of life”, the Ginsburgs “only aim for radical social change” and, perhaps, Mr. Moritz “was just avoiding to pay taxes”.

Come her time for rebuttal, however, Ruth seems a lot more confident and emboldened. She argues that the current state of the Law insists on applying for a country that, basically, doesn’t exist anymore -due to the consistent, visible changes the dynamics of society has verified over the course of decades- and that the Law, as such, should upgrade to these new, updated dynamics (corroborating a saying heard earlier in the film, “A Court should not be determined by the weather of the day, but by the climate of the era”…).

Eventually, the Court of Appeals rules unanimously on Ruth and Martin’s favour, thus conceding the tax cut to Moritz and setting a lasting precedent. Ruth herself went on to become a co-founder of the Women’s Rights Project of the ACLU (a key element in revamping many gender-based laws) and, later, by a landslide vote, an Associate Justice of the United States Supreme Court -one of only four women in the History of the United States to hold that position, so far.

The end of the film shows the real Mrs. Ginsburg climbing the steps of the Supreme Court building, as well as title cards that inform the fate of her family: Martin continued practicing Law and was a professor at Columbia until his death in 2010; daughter Jane also became a Lawyer and professor at Columbia, as well; and son James became a music producer and founder of Chicago-based Cedille Records. 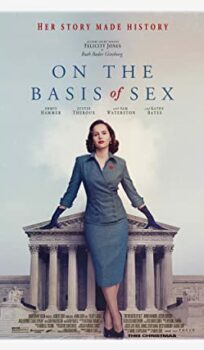