Marlon Brando is a washed up boxer who took dives for the local racketeers.

His brother, Rod Steiger, is the number two man for the head racketeer Lee J. Cobb.

When Marlon Brando falls for Eva Marie Saint, who is the sister of the latest victim of Lee J. Cobb, his conscience begins to bother him and he wonders if he should rat.

Rod Steiger is then whacked for declining to whack his brother.

Marlon Brando testifies against Lee J. Cobb in court and fights him man to man on the waterfront.

At the end of the film the workers rally behind Marlon Brando and Lee J. Cobb is destroyed. 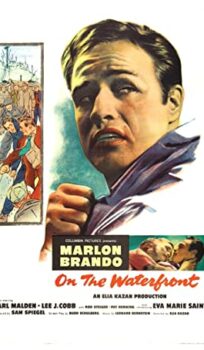