The only movie directed by Marlon Brando.

Longworth (Karl Malden) and Rio (Marlon Brando) are outlaws in the old West.  Rio began riding with Longworth as a young orphan, and calls Longworth “Dad”.  They rob a bank in Mexico.  Longworth betrays Rio, running off with the gold and leaving Rio to for the Federales.  5 years later, Rio escapes from jail and goes looking for revenge.  Longworth used the money to buy respectability, and is sheriff in Monterey, California.

Three outlaws want to rob the bank there, but need someone to deal with Longworth, so they recruit Rio.

At Monterey, Rio goes ahead to see Longworth.  Rio acts like everything is fine, and they just split up in Mexico.  Longworth is wary, but brings Rio to his house.  Longworth married a widow, and has a stepdaughter, Luisa.  Rio and Luisa fall in love.  Rio tells Luisa the truth about Longworth’s betrayal, and his desire to kill Longworth.  Luisa is willing to go off with Rio, but not if he kills her stepfather.  Rio quits the gang, and the others go to rob the bank without him.  At the bank, one robber is killed, one escapes with the gold, but they kill a girl.  Longworth decides to pin it on Rio, so he can hang Rio and keep his past life hidden.  An unsuspecting Rio is arrested and thrown in jail.  He is told he will get a nice trial and be hanged the next day.

With Luisa’s help, Rio escapes from jail.  Rio wants to avoid a confrontation, but Longworth goes after him.  Rio fakes being shot and drops to the ground.  When Longworth comes around to look at the body, Rio shoots and kills him.  Rio promises to come back for Luisa, and rides off.

Note: According to many sources, this was not Brando’s original ending.  Brando filmed a scene where Luisa is accidentally shot and killed by Longworth in the final shootout.  The studio cut that to make a happier ending. 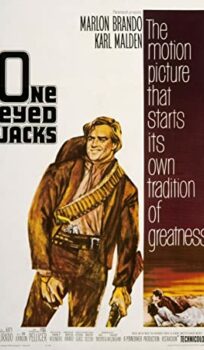