A great caveman movie remake of the 1940 original that will live forever thanks to special effects by Ray Harryhausen and the poster with Raquel Welch that became more famous than the movie.

Loana (Raquel Welch) while clad in a designer fur bikini survives an Allosaur attack, a fight between a Triceratops and a T Rex, a cat fight with another cave woman, getting snatched up by a Pterodactyl and a volcano eruption during a fight between two rival tribes.

The movie ends with the two tribes apparently reconciled (volcanoes tend to do that to you) and Loana reunited with her caveman boyfriend Tumak (John Richardson). 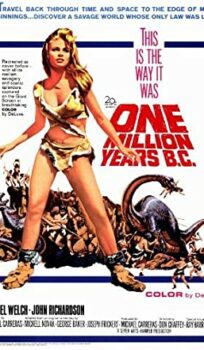