Two groups of government assassins ( the Alpha Group and Omega Group) are housed in an underground facility and  are overseen via video camera by “Corporate” who resides at a separate facility. All the assassins are given Tarot Card names. It’s “Fool’s” (Joe Anderson’s) first day on the job, and “The Devil” (Jeffery Tambor) is murdered, the killer locks down the facility so none of the assassins can escape and “Operation: Endgame” begins, which is a bomb set to go off in 90 minutes and destroy the underground lair. The assassins all try to discover who the killer is while trying to find a way to escape when they suddenly turn on each other, (we learn that Corporate had given the Alpha Team and order to kill the Omega Team.

The Characters start killing each other:

Only fool escapes while “Corporate” watches everything on video. The 3 people who are at corporate are Susan (Beth Grant), Neil (Michael Hitchcock) and Carl (Tim Bagley). It turns out the Susan was having a phone sex affair with Devil and is the one who killed him with sharpened pencils. Susan is also Fool’s mother, she had sent him in the make sure that nobody made it out alive and to recover the disc’s (evidence of the assassins activities over the years) from the safe in devils office. Now that Obama was in office the government made the decision to shut down the assassins business and destroy the evidence so Obama would never find out.

Susan shoots Neil and Carl, officially destroying any evidence. Fool calls Susan to tell his mother he had the discs and he hails a cab riding away. 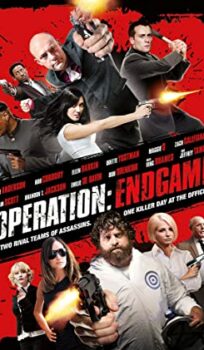