Captain Sherman (Cary Grant) leads his crew and the disabled submarine, Sea Tiger, through the Pacific to a safe harbor for needed repairs. Along the way Lt. Holden (Tony Curtis) scavenges parts for the sub, picks up five stranded female Army nurses and a handful of Philippine families to cruise with them.  On New Year’s Eve the crew paint the sub pink and are celebrating on deck when Japanese pilots start bombing.  Because none of the Allies realize that the Sea Tiger has been painted, all naval vessels in the Pacific are put on alert for the unidentified pink submarine and are told to bomb it on sight.  When a nearby destroyer starts launching depth charges, the crew release debris from the sub and include the nurses undergarments.  Realizing it is the Sea Tiger, bombing stops and the Sea Tiger limps into port. 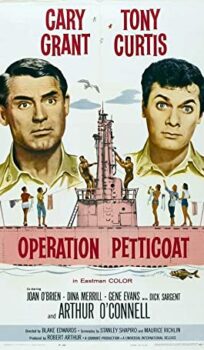