Eddie (Dana Carvey), Lou (Todd Graff), Uncle Max (Milo O’Shea) & Aunt Connie (Sally Gracie) trick Sal (James Tolkan) into destroying the city’s IRS building, causing him to be sent to prison for life. Eddie then goes to see Milt (Robert Loggia), Mona (Doris Belack), and Annie (Julia Campbell), where he returns the $180,000 that he stole from Milt earlier on to pay off a debt to Sal and then reveals his true identity to them, and he tells Annie that he used her to get to Milt’s money, but fell in love with her for real. She slaps him, and he leaves, and on his way out he tells the arriving David (Bill Bradshaw) that he had a great family. He also secretly returns Milt’s prized baseball back to him.

Eddie goes to see Annie some time later at her hospital job, and he again tells her he loves her, but she says she doesn’t love him (even though she’s lying). He leaves, but when elderly patient Harold (John M. Watson, Sr.) reminds her of the good things he did for her, she goes after him. She stops him in the street, and soon a car suddenly hits him. She goes to his aid and tells him she loves him, and he reveals that he’s fine and that he set the whole accident up to get her to say it (Lou was the driver). They kiss each other. 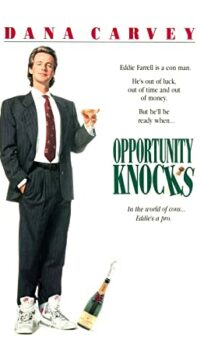