Conrad’s brother Buck dies in a boating accident and both Conrad (Timothy Hutton) and his mother Beth (Mary Tyler Moore) feel that Conrad was responsible for his death. After a suicide attempt and a stint in a mental hospital, Conrad is once again let into a society where he attempts to cope with falling behind in school, girls, and being part of the swim team.

With the help of Dr. Berger (Judd Hirsch), Conrad is able to realize that his brother’s death was not his fault. Conrad’s mother Beth refuses to see that

Calvin (Donald Sutherland), after realizing that Beth still harbors angry feelings towards Conrad, gives a long speech in which he tells her that he doesn’t love her anymore. Beth ends up leaving while Conrad watches from a window. Calvin and Conrad are left talking in the backyard of their home. 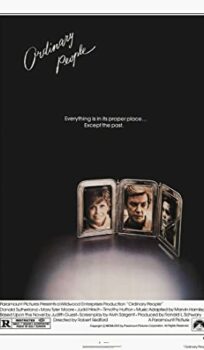