Short pooper:
Leena/”Esther” (Isabelle Fuhrman) kills Tricia (Julia Stiles), Allen (Rossif Sutherland), Gunnar (Matthew Finlan), and Detective Donnan (Hiro Kanagawa), and gets away with it all. In the end, she permanently assumes the “Esther” persona and is seen being moved to an orphanage, thus tying up with the events of the original 2009 movie.

Long version:
In reality, Tricia’s real daughter, Esther -who had been presumed missing for four years prior to the events of this film-died by accident during a scuffle with her brother Gunnar and Tricia buried the girl and covered up the whole thing behind Allen’s back. After admitting this to Leena, they both agree to keep up the charade, get rid of Donnan’s body and fool everyone into thinking he went away on a trip. Nonetheless, both women remain suspicious of one trying to kill the other.

Tricia tries to kill Leena, and, in turn, Leena tries to kill both Tricia and Gunnar, after which she attempts to flee but is brought back by Police. Having had enough, Tricia and Gunnar band up to get rid of Leena/”Esther” and make it look like a suicide, but Leena defends herself and escapes. As Allen returns from a business trip, Leena gets the upper hand and kills Gunnar by spearing him with a crossbow and stabbing him to death. When Tricia gets wind of this, she fights Leena, and they inadvertently start a fire that eventually consumes the whole house. Their fight leads them both to the roof, with Allen following behind. The two women end up dangling off the edge, desperately begging to be saved.

Allen, still fooled by “Esther”, who claims Tricia is trying to kill her for no reason -while Tricia begs him not to listen to “Esther”-lets go of Tricia, who falls to her death and saves “Esther.” However, as Allen checks “Esther” to ensure she is all right, the perfect dental prosthesis she used to cover her crummy-looking real teeth falls off, and he finally realizes the deception. Enraged, despite “Esther” claiming she loves him and “did it all for them”, he screams at her and calls her a monster, which, in turn, makes “Esther” push him off the roof, killing him.

Leena/”Esther” wipes her face clean and manages to escape the burning house alive and meet the firefighters. In the final scene, Dr. Segar (Samantha Walkes) makes the arrangements for “Esther” to be put in an orphanage where a new, loving family can welcome her and give her a fresh start -this ties up with the events depicted in the 2009 film ORPHAN-. “Esther,” relieved to be able to walk away from her crimes, smiles creepily toward the camera. 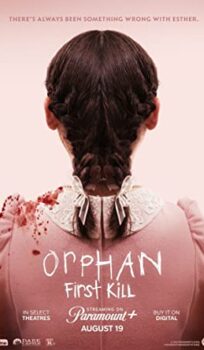