Submitted by ItIsStrange and Halle

John and Kate adopt Esther, and older orphan after their third child is stillborn. She seems perfect at first, but it become obvious to Kate that Esther is up to no good

Esther has dwarfism that causes her to look like a child but is actually 33.

Kate contacts what she thinks is an orphanage, only to find out it’s a mental institution and learns that Esther was kept in an Estonian mental institute where she was the most violent patient. She managed to escape and pose as a child in order for a family to adopt her and take her to the U.S. Esther had killed a string of families once the father of each family rebuffs her seduction attempts.

She rushes home only to find that Esther killed John, and is trying to kill their deaf daughter, Max.

In attempting to escape, Kate takes Max outside, where Esther follows and manages to chase Kate onto the ice of the pond in their backyard with the knife. Max picks up the gun her mother drops and attempts to shoot Esther, but shoots the ice and both Kate and Esther fall though.

After much struggling and being stabbed underwater, Kate is able to crawl out of the hole in the ice. Esther gabs her legs and begs her to help pull her out, but we see that Esther is holding the knife behind her back, ready to stab Kate. Kate screams, “I’m not your f*cking mommy” and kicks Esther in the head, breaking her neck and causing her to fall back into the water. Kate and Max are found by the police soon after, and are safe. 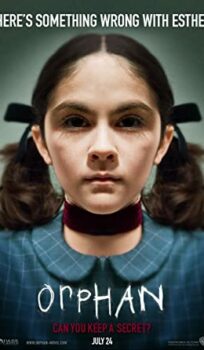