Rick (Jason London) quits Majors’ (Lee Majors) employ when he finds out from him that he had earlier fired all of his friends due to seeing them as an embarrassment (and he also discovers that Majors doesn’t like Anna’s [Caroline Dhavernas] fiancée Barry [Todd Richards]), and then witnesses Papa Muntz’s statue being taken down. Jenny (A.J. Cook) then comes up to him and tells him that his friends are about to leave town for good in Barry’s plane, so they rush to the airport and stop them from going, encouraging them to stay and help take back the mountain from Majors. Pig Pen (Derek Hamilton) goes up to Inga (Victoria Silvstedt) and professes his love for her and asks to have sex with her, and she agrees to it in order to upset Majors.

At the mountain’s anniversary celebration, Majors’ takeover plans are gradually ruined, first when he, his potential investors, and the other yuppies present see Pig Pen and Inga having sex inside a snowplow he unveils, and then when Barry causes disruption by flying in low in his plane. Barry’s actions cause Majors to reveal his contempt for him in front of Anna, and then he orders his lackeys to lock her in his Hummer until Barry goes away. Rick and his other friends then come rampaging in on their snowboards and cause total chaos, sending all of the yuppies and investors running. Stumpy (David Koechner) starts towing Papa Muntz’s statue back to its rightful place with his snowplow, and Rick frees Anna and takes her to a section of town where Barry is waiting in his plane. He tells her that he understands now that she belongs with Barry, so they hug each other goodbye, and she and Barry fly away.

After Majors calls Ted Muntz (Willie Garson) a retard for the umpteenth time, Ted severs the whole takeover deal with him and tells him to take a hike. Majors agrees to leave, but before he can give Ted a parting ass-whupping, the Papa Muntz statue – which got free from the snowplow’s towing chain – comes crashing through the stage and knocks him off of it to the ground. Lance (David Denman) then comes in on his snowmobile, snags Majors by the foot with an attached skiing rope, and drags him along the ground for a bit before slinging him right into a porta-potty, which then slides down a hill and gets sent up into a tree. Rick and company then celebrate.

Rick and Jenny become a couple, and the movie ends with them snowboarding together. 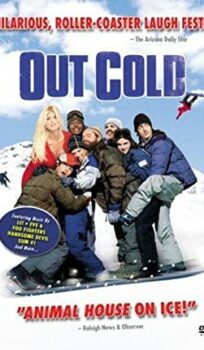