After discovering the truth about their respective suitors, Liz (Dyan Cannon) -along with her mother, Mavis (Elaine Stritch)- and Vivian (Gloria De Haven), disappointed, decide to walk off the cruise and charter a plane to return home.

Meanwhile, Herb (Jack Lemmon) and Charlie (Walter Matthau) flee the ship on a lifeboat, but not before having to confront naughty Cruise Director Gil (Brent Spiner), who then wishes them to drown and also badmouths about the ship owner, Mrs. Carruthers (Rue McClanahan), not knowing she’s behind him.  In consequence, she fires him and bestows his job upon affable dance host Mac (Hal Linden).  This allows both him and his friend Jonathan (Donald O’Connor) to finally put Gil in his place.

In the end, Herb and Charlie meet again -and make up with- their respective couples.  It also turns out (DON’T ASK ME HOW, SINCE HE HAD CLEARLY TORN IT EARLIER IN THE MOVIE AND SCATTERED THE PIECES) that Charlie had recovered the US$18,000.00 check from the poker game.  He and Liz kiss.

Everyone flies off, together.

Before the credits roll, we see Mac singing, as the new Cruise Director, while Gil has been downgraded to a dance host.  He dances with an elderly passenger, with a disgust expression on his face.

Oh, one more thing:  Don’t miss the credits, for the bloopers.  They’re quite good!! 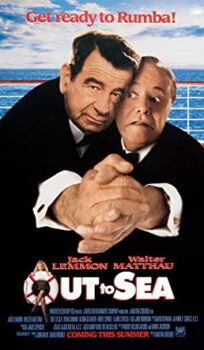